Resources in Resilience: Bryan Doerries and The Power of Stories

Steve serves on One Summit's Board of Directors. He and his wife Donna live in Durham, NH.

Famine, Plague, War, Enslavement, Disease, Death. In our time on this planet, humans have both caused and endured many seismic traumas. Survivors grieve their losses of family, friends, limbs, homes, health, and more.  But many climb back from the depths of grief and it numbness, its disruption of thought and sleep, its sense of hopelessness, its self-blame. Stories of loss and resilience are as old as literature itself. Ancient Greek bards and dramatists, like Homer and Sophocles, focused on all these themes. Do they have anything to offer us moderns?

Bryan Doerries believes they do. He studied classical literature at Kenyon College. The subject’s pressing utility, however, came to him only after the death of his 22-year old girlfriend, who courageously battled the chronic grind of Cystic Fibrosis, for which modern medicine has no cure.  As he recalled: “In the following years, whenever I returned to the ancient Greek tragedies I had studied in college, the conflicted, suffering characters in the plays spoke to me with an immediacy that I never could have anticipated before caring for Laura. I took comfort in knowing that I wasn’t the first person who had experienced compassion fatigue, or who had hesitated to act decisively in the presence of extreme suffering, or who felt ambivalent about helping someone to die, or whose grief manifested itself in a withdrawal from the world. If ancient Greek tragedies could speak directly to me, I reasoned, they could also speak to anyone who had lived the human experiences they described.” 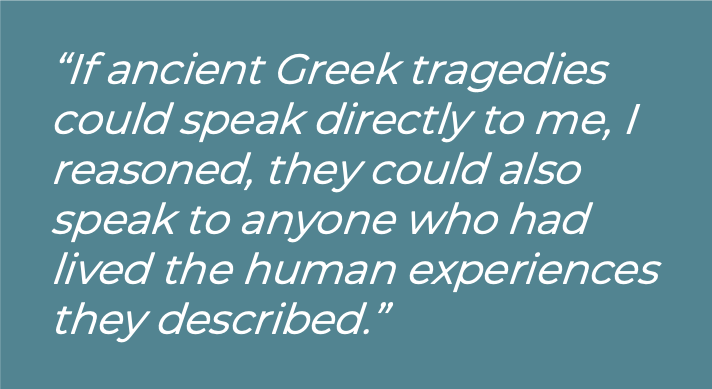 And so he began Theater of War, through which he has spent the last fifteen years directing “readings of Greek tragedies and other ancient texts” for targeted audiences. Most of his book covers productions for military groups, starting in 2009 at a Department of Defense conference on “Warrior Resilience.” His troupe then gave 100 performances around the country for officers, enlisted personnel, and their families, including SEALs. Doerries brought actors, including Frances McDormand, Paul Giamatti and David Strathairn, to distant locales for selected readings, followed by audience discussion about their own struggles with PTSD, suicide, survivor’s guilt, spousal abuse, and more. As Doerries points out, Greek playwrights Sophocles, Euripides, and Aeschylus — and their audiences — were all veterans of war. Plays such as Philoctetes, Ajax, Agamemnon, and the Madness of Heracles convey in shrieking laments, piteous admissions, and thunderous damnations, the feelings and actions of soldiers and their families who suffer the burdens of war. Other readings and settings have included: the Book of Job for families battling cancer and for tornado and hurricane survivors; Women of Trachis for hospice care workers; and Prometheus Bound for prison workers.

Doerries cites researchers who argue that the ancient plays, performed in open amphitheaters before thousands, aimed to "arouse powerful responses, including pity and fear, in order to facilitate a healthy and balanced response to personal suffering and the suffering of others.” Sophocles and his peers “were not articulating a pessimistic or fatalistic view of human nature; nor were they bent on filling audiences with despair. Instead, they were giving voice to timeless human experiences — of suffering and grief — that, when viewed by a large audience that had shared those experiences, fostered compassion, understanding, and a deeply felt interconnection.” The Theater of War showed that the same process worked with modern Americans. As one military officer responded, “These plays were written long ago, but they describe people I know.” 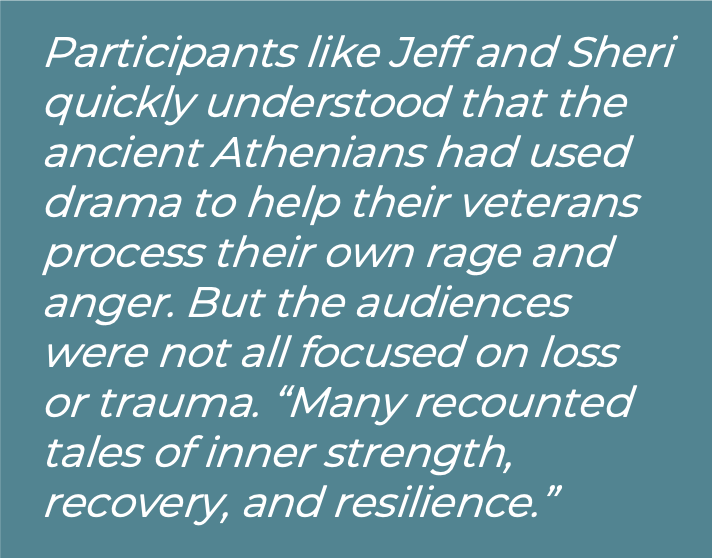 Doerries skillfully weaves the ancient dramas together with the lives of military families such as Army Major Jeff Hall and his wife Sheri, whose 20-year marriage was strained and stretched by deployments. When Jeff returned from his second tour in Iraq, Sheri recalled “I looked into his eyes and I didn’t recognize the man I had married nearly twenty years ago.” He was filled “with hatred, not for me or for our girls, but for people in his own command who had betrayed him.” Like Ajax, Jeff spiraled downward until Sheri found him in the front yard holding an empty bottle — and a pistol. After hearing the voices of Ajax and his wife Tecmessa, Sheri said to Jeff: “That was you. That is me. That is me.” Participants like Jeff and Sheri quickly understood that the ancient Athenians had used drama to help their veterans process their own rage and anger. But the audiences were not all focused on loss or trauma. “Many recounted tales of inner strength, recovery, and resilience.”

The Theater of War productions are very successful. But how to scale the experience up for wider consumption? Doerries’ answer is his graphic novel, The Odyssey of Sergeant Jack Brennan. It follows a Marine sergeant who gathers his men on the eve of their return home after seven months in Afghanistan, to tell how they can learn from the three-thousand-year-old story of Odysseus and his band of Greeks. With storytelling and group discussion, Sgt. Brennan shows how Homer’s Odyssey might prepare them, the one percent, for return to the world of the other 99 percent.

The pictures, dialogue, and storyline shift back and forth between experiences common to Odysseus, his men, and the Marines. As I followed them all, I grew convinced that we might well include the families of One Summit’s SEAL mentors and little warriors battling cancer. These include alienation from the La-La Land of “civilians” who just don’t “get it” as they live their lives oblivious to the suffering around them; the sense of being unfairly cursed, by gods or fate; escape though substances; the falling away of friends. Brennan’s Odyssey, like Homer’s, does not sugarcoat life’s challenges. Popular stories typically recycle powerful themes first crafted by the ancients: among them journeys of suffering and discovery, pride and fall, and blocked love. But the enduring and universal theme is resilience and redemption. Bryan Doerries understands this. Both his Theater and Odyssey utilize “tasks” common to the literature of grief support and post traumatic growth — the work of J. William Worden, Richard Tedeschi and others.

Among them are accepting the reality of loss, experiencing its pain, investing in new relationships or activities, and integrating loss while moving forward in life. Escape and delay are no paths to recovery. Like the Theater’s audiences and Brennan’s Marines, we must all face the pain of loss. We can do it best with what Tedeschi calls deliberate rumination—actively and honestly thinking, talking, or writing about the meaning of loss, its challenges, and how to move forward—one small step at a time. We can learn to rely on others, to both give and take help. Finally, we can find meaning and a new sense of identity while integrating our loss. Jack Brennan’s Marines have tattoos to honor their fallen friends. At the same time, they move forward: “We have a sacred duty to uphold…we owe a debt to the living. To have each other’s back.” 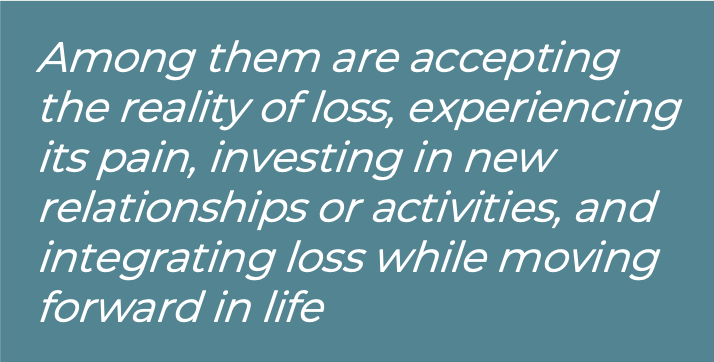 This is all at the heart of One Summit’s mission — in our climbs, our outreach, and our storytelling. As Bryan Doerries so well puts it, we hope our children, our mentors, their families, and our broader audience might be “healed by the realization that they are not alone in their communities, not alone in the world, and not alone across time.”