Stories from the Summit – Dr.Jonny Kim 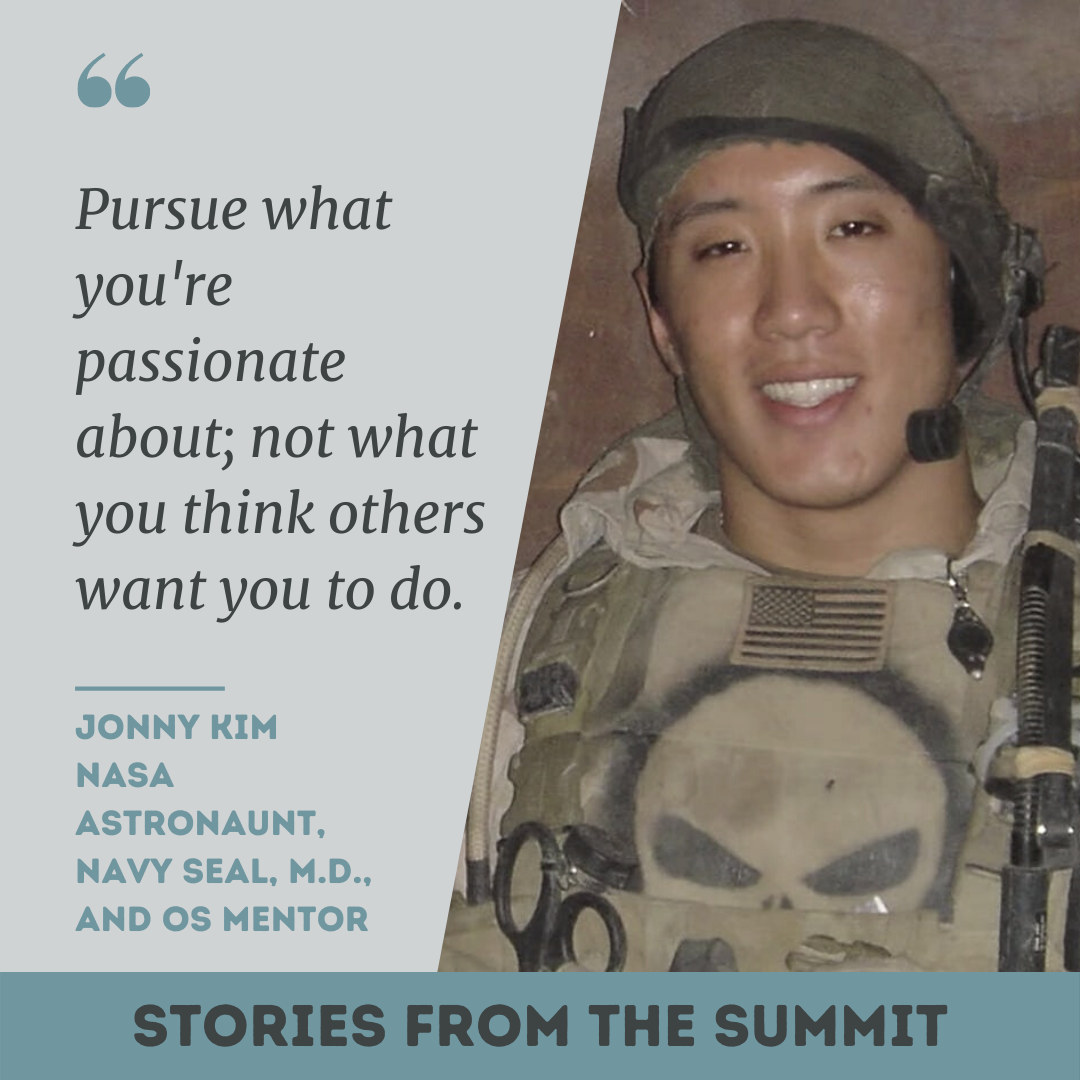 As part of our commitment to our community of resilient warriors, we launched Stories from the Summit this month, an online enrichment series designed to inspire, educate, and entertain through the blending of personal stories, practical insights, and application of resilience in our daily lives. Our first guest was Dr. Jonny Kim. At only 37 years old, Jonny's accomplishments are outstanding; Navy SEAL, Medical Doctor, Astronaut, Husband, Father, One Summit Mentor. On the evening of June 17th, fifty-five little warriors, their families, and mentors listened to Jonny's inspiring story and engaged in an interactive Q & A session.

Jonny, a first-generation South Korean American, grew up in Los Angeles, California. He recalled he was very insecure as a child. It's hard to believe that this young and very successful man started as a shy kid who felt lost and "didn't feel like I had an identity." The one thing he did know was that he wanted to be part of something bigger than himself and live a life of service, precisely what he has done.

Jonny enlisted in the Navy as a Seaman recruit after graduating high school in 2002. The warrior culture called out to him; the Navy is where he "first found purpose in my life." Jonny described having one of his first life challenges during Basic Underwater Demolition/SEAL (BUD/S) training in Coronado, CA. People there were bigger, faster, and stronger than he was. Looking back on his time in BUD/S, he realizes now that it's not how strong or how lucky someone is that determines success; it's about who's the most resilient. "We measure ourselves by our character, by how we treat and respect other people and ourselves, and how much resilience we have to fall and get back up each time." These words resonated with all of us in the audience. At One Summit, this life lesson is at the heart of our mission.

After completing his training at Naval Special Warfare, Jonny reported to John F. Kennedy Special Warfare Center and School in Fort Bragg, NC, for the Special Operations Combat Medic Course. He was assigned as a Special Warfare Operator to SEAL Team THREE Charlie Platoon in San Diego. He served as a Special Operations Combat Medic, sniper, navigator, and point man on more than 100 combat operations spanning two deployments to the Middle East, including Ramadi and Sadr City, Iraq. During his time in the SEALs, Jonny witnessed suffering all around him. The challenging experiences in combat changed him and made him want to give back and serve differently. That was when he found medicine.

With the Navy's support, Jonny graduated from Harvard Medical School in 2016. He then began his medical internship with Harvard Affiliated Emergency Medicine Residency. The desire to serve remained ever-present for Jonny. "I discovered that it's only because of the challenges that I've had throughout my life, and the mentors and friends who supported and pushed me forward, and the resilience that I learned along the way that I was able to believe in myself enough to have what it takes to be an astronaut." At the time of his astronaut selection in June 2017, he was a resident physician in emergency medicine with Partners Healthcare at Massachusetts General Hospital and Brigham and Women's Hospital.

He reported for duty in August 2017 and completed two years of training as an Astronaut Candidate. Jonny is a member of the Artemis Team, a select group of astronauts charged with focusing on early Artemis missions' development and training efforts. Through the Artemis program, NASA and a coalition of international partners will return to the Moon to learn how to live on other worlds to benefit all. Artemis missions will send the first woman and the next man to the Moon in 2024. 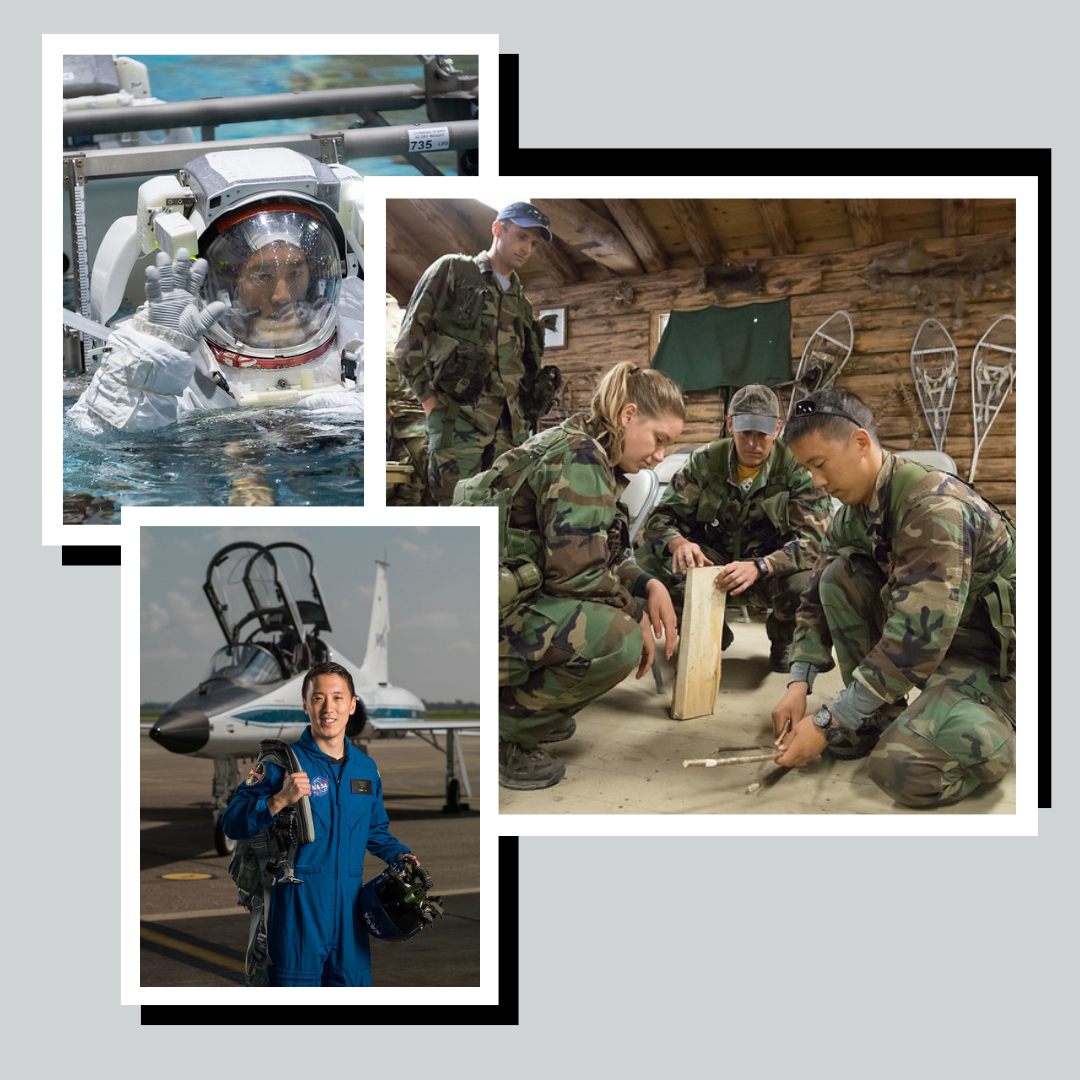 "Leave the world better than how I found it." These words from Jonny are simple yet profound. The recent global pandemic, ongoing unrest throughout the world, and personal, daily challenges can make life difficult to understand. But, sharing our stories of resilience, being kind, and pushing past our human limits are a few ways Jonny believes we can all make positive changes. "We are always a little bit better when we give a piece of ourselves to become something bigger than us."

A big takeaway from the evening was that we may not always have the answers. "That's ok. Life gives us tools to address the roadblocks and falls. Challenges make us uncomfortable and feel alone. But we are not alone; we are stronger together. Form bonds, trust, and depend on those around you." Jonny feels that this ability to connect with others is crucial. It unites us all.

Dr. Jonny Kim was the perfect first guest for our Stories from the Summit Series. Listening to him share his incredible journey was inspiring. When you read about his accomplishments, it's easy to be in awe, yet after hearing him speak, you realize he reached these incredible heights by focusing on each step at that moment in time. "Focus on a singular goal and commit. We do our best when we are completely committed in both mind and spirit." These words from Jonny resonate not only for him but for us all. We all indeed are the authors of our own stories! 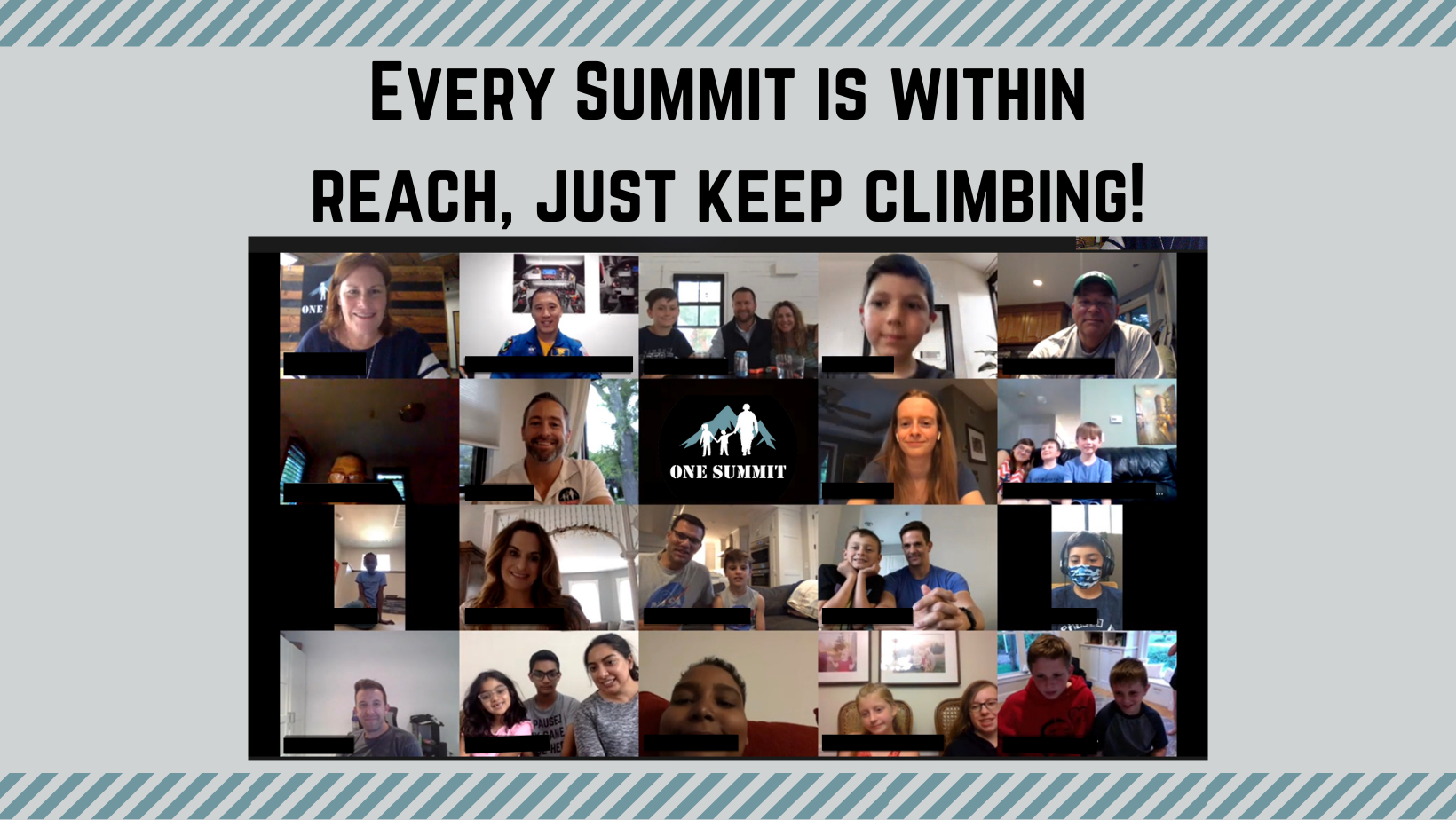