Profiles in Resilience: The Sterling Family 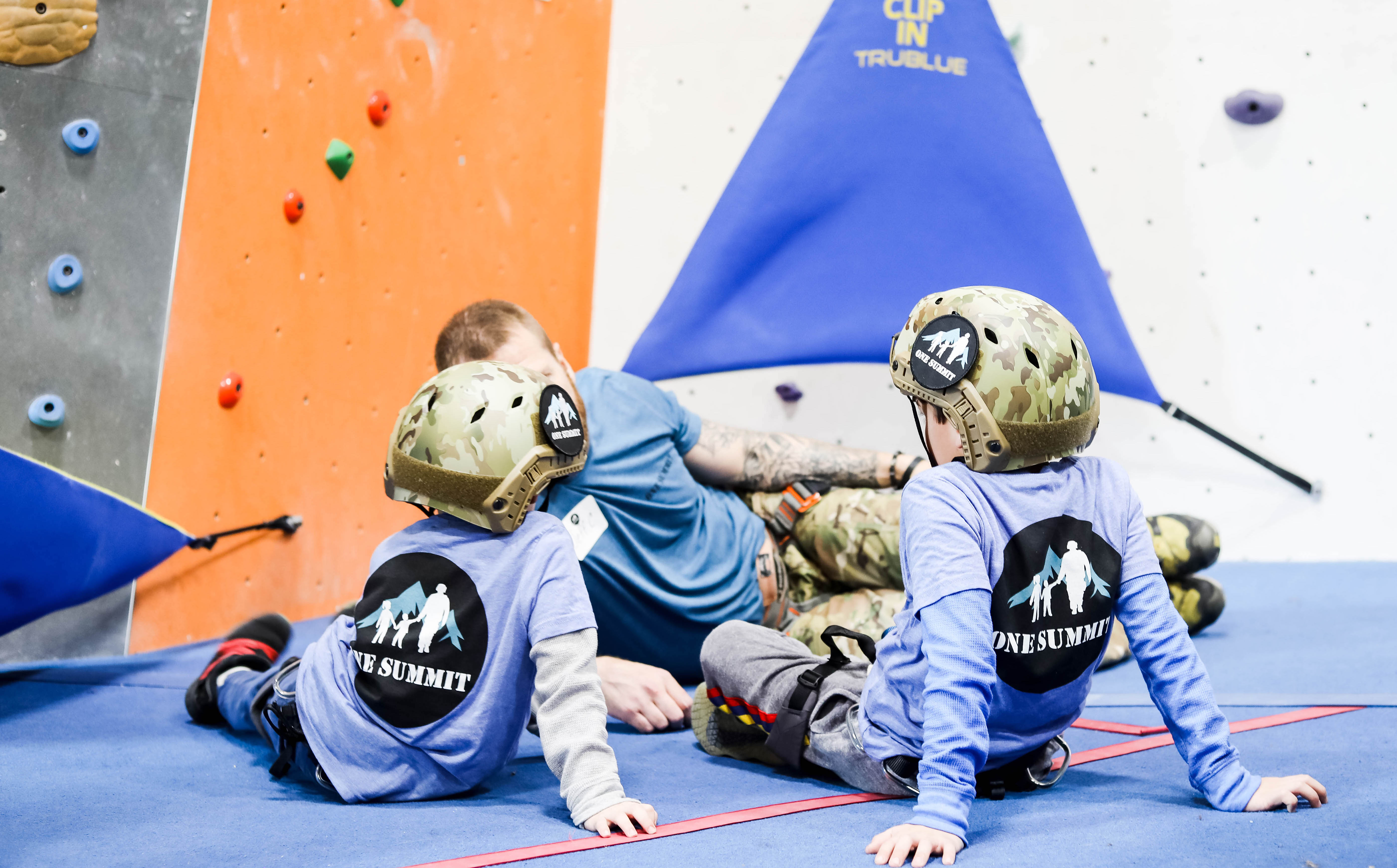 At One Summit, we believe there is an opportunity embedded in each challenge and setback we inevitably encounter in life. Those who have endured any form of trauma or adversity only to emerge stronger share this very sentiment. And it’s clear why: they’ve reached a “peak” and, as a result, have a new perspective on the deep, dark “valleys” traversed along the way. 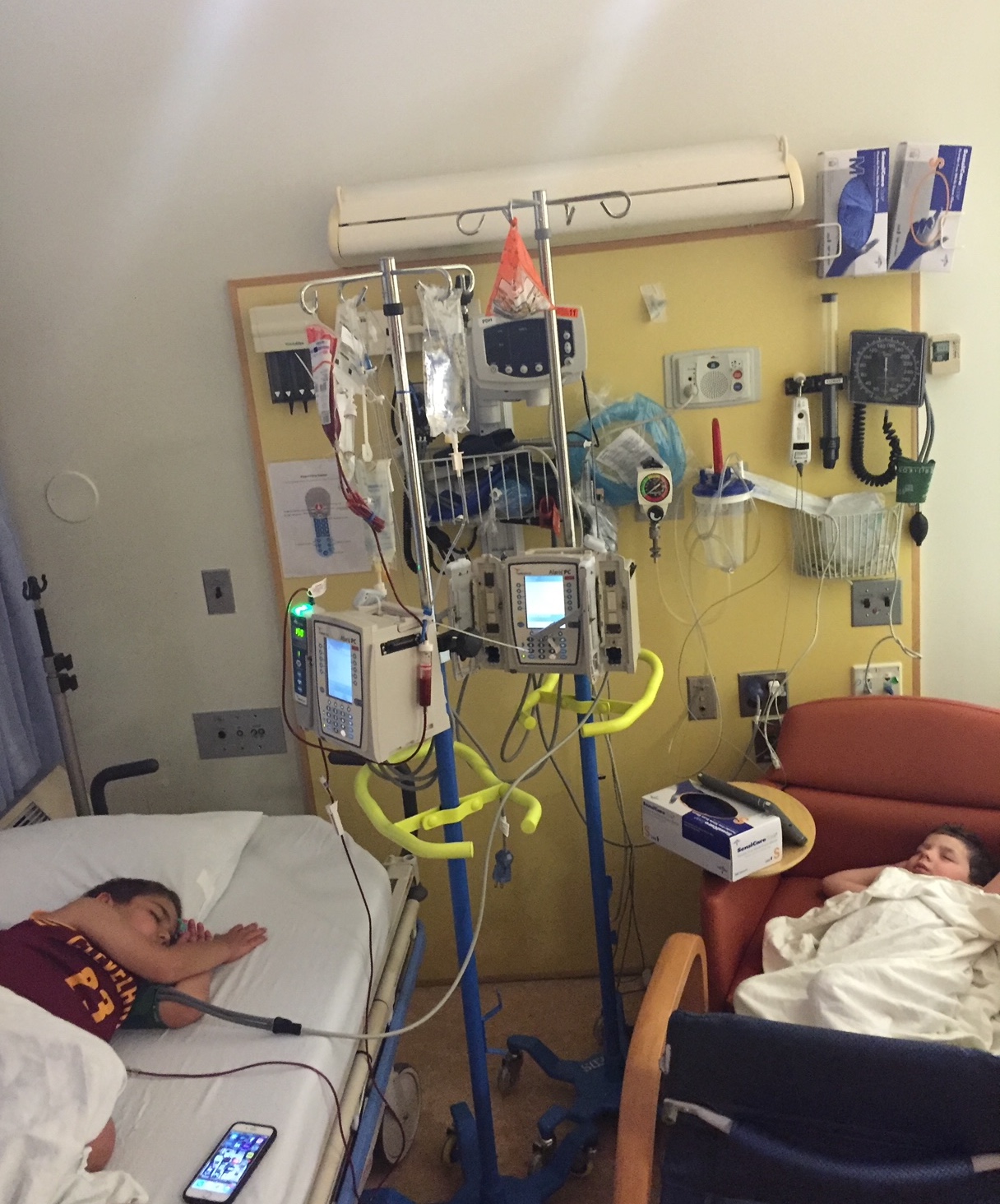 The Sterlings are a perfect example of this: “While we would never want to go through this again and never wish this upon anyone, we did really learn a lot about ourselves.” This just happened to be cancer. Their son, Hunter was diagnosed with Leukemia (B-Cell ALL) in 2014 at the young age of two. At the time, they had just had their second child, Reid.

While they’re grateful that they were able to seize the opportunity his diagnosis presented for them to grow – both as a family and as individuals – the Sterlings are also quick to admit that it was hard to see this the moment life derailed and their fight began: “The daily struggle was considering how we would just deal with that week of treatment or trip to Memorial Sloan Kettering Cancer Center. We had to live and get through each day. The anticipation and fear would get the best of us at times.”

The “fight-or-flight,” reactionary mindset the Sterlings experienced in the aftermath of Hunter’s diagnosis is a common aspect of struggle – regardless of its form. It quietly and quickly narrows our purview to only the things that are mission-critical. As Hunter and Reid’s dad, Eric remembers: “The first 6 months were an absolute blur trying to educate ourselves about Hunter’s disease and what treatment protocols entailed, including understanding the short-term effects of his treatment and the long-term effects of his chemo. During this time, we had a 6-month-old son, Reid whom I barely got to know as we were so focused on Hunter’s treatment.”

As Martha W. Hickman advises in Healing After Loss, this “firefighting” phase isn’t something we can walk around; we must walk through it. And the walk can be debilitating, isolating and nonlinear: “The days and nights spent at the hospital, waiting on results and answers were long and emotionally and physically draining. This was our “new” normal – walking on eggshells and carefully analyzing every situation.” 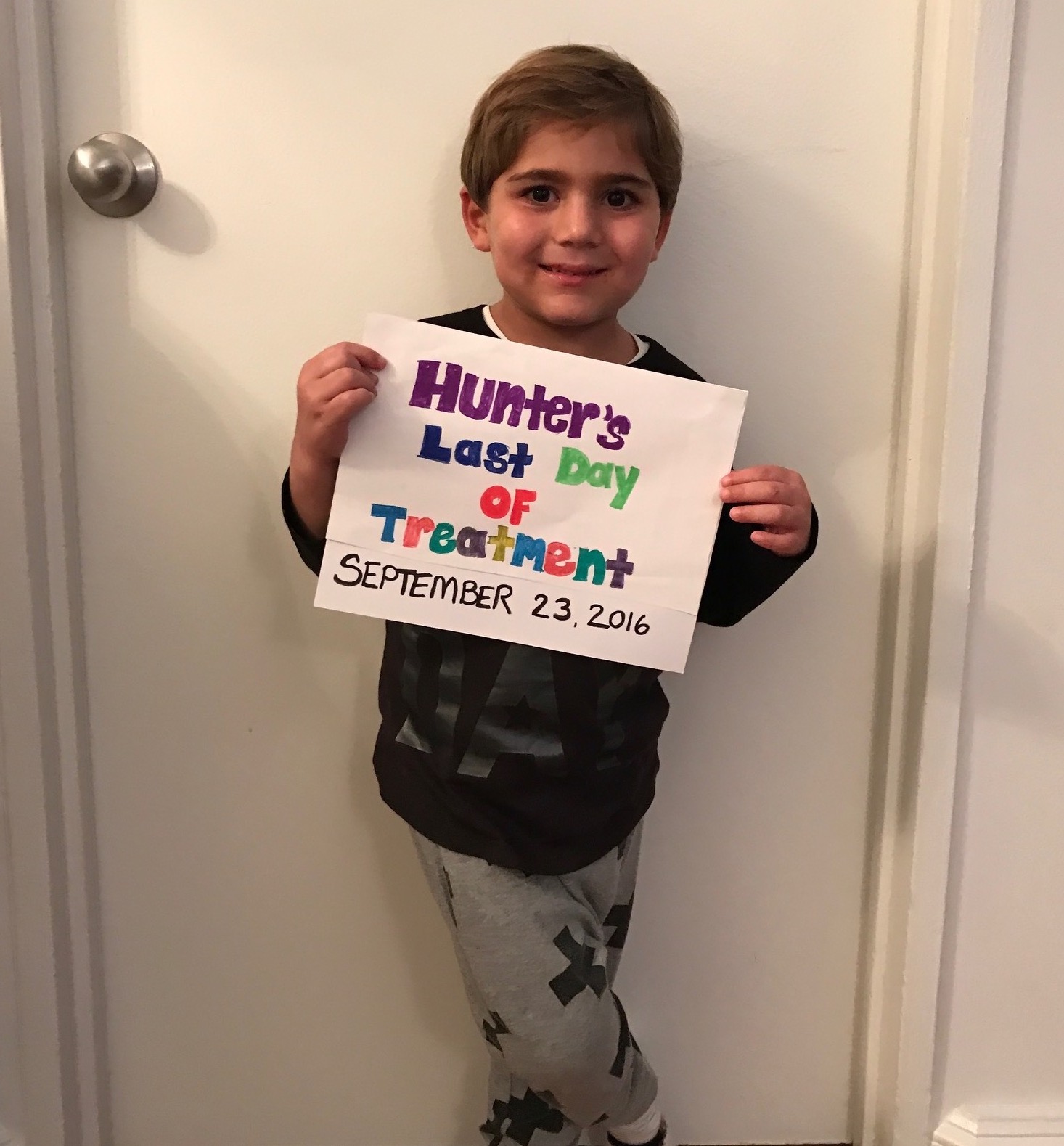 While fast-forwarding to the peak in these moments isn’t possible, there are tools that can provide relief and hope, as well as a glimpse into the new perspective that awaits us upon exiting the valley. Faith, reflection and new experiences are a few that are often utilized. As are the stories of others.

Which brings us back to the Sterlings – who’ve offered to share their story here for this very reason. They realize it’s one that might resonate with others.

So, what exactly did they learn?

“You can only control what you can control.”

Life during Hunter’s treatment [from 2014-2016] was an attempt to constantly adjust to a new normal where the only constant was change and fear.

His treatment was broken up into 3 phases. The induction period, which was the super-intensive 28-day cycle, consolidation, which included several treatments of high dose intrathecal methotrexate over a period of a few days, spinal taps with chemo infused into his spine and lastly the maintenance phase. Throughout this time, he had to have multiple blood transfusions.

Hunter’s life consisted of a daily regime of multiple chemos and several other drugs that were part of his life for the next 3 years. Some medicines were handled well, some medicines were much more impactful and severely limited his ability to do normal things like play outside, go to school, or be with his friends.

All we could do was try to evaluate what the impact would of any particular situation encountered.

“We’re here for brief time and make the most of it.” 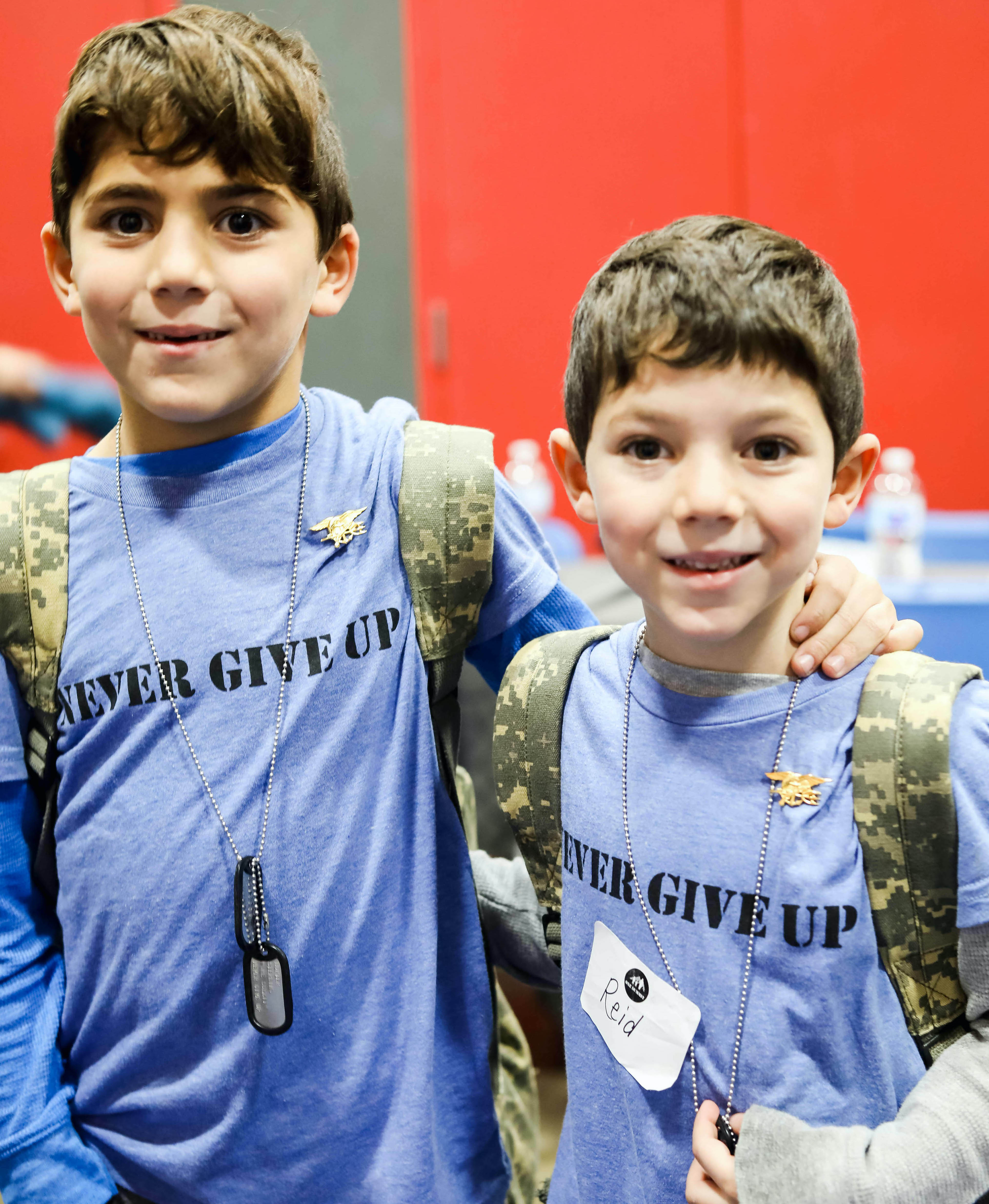 When kids who are of school age (Grade 1 and beyond) go through cancer treatment, they feel alienated and different from the other kids. When they get to participate in an event like Climb for Courage they are given the opportunity to do something healthy kids are doing all the time. I think for myself, knowing that they are doing these activities with the SEALs is completely unbelievable. But for the kids, it's simply an opportunity to be a kid for an afternoon.

Our kids have grown up idolizing superheroes, so spending time with the Team in One Summit gives them the opportunity to meet and spend time with real heroes. It’s an opportunity of a lifetime.

“Always forgive and always be grateful.” 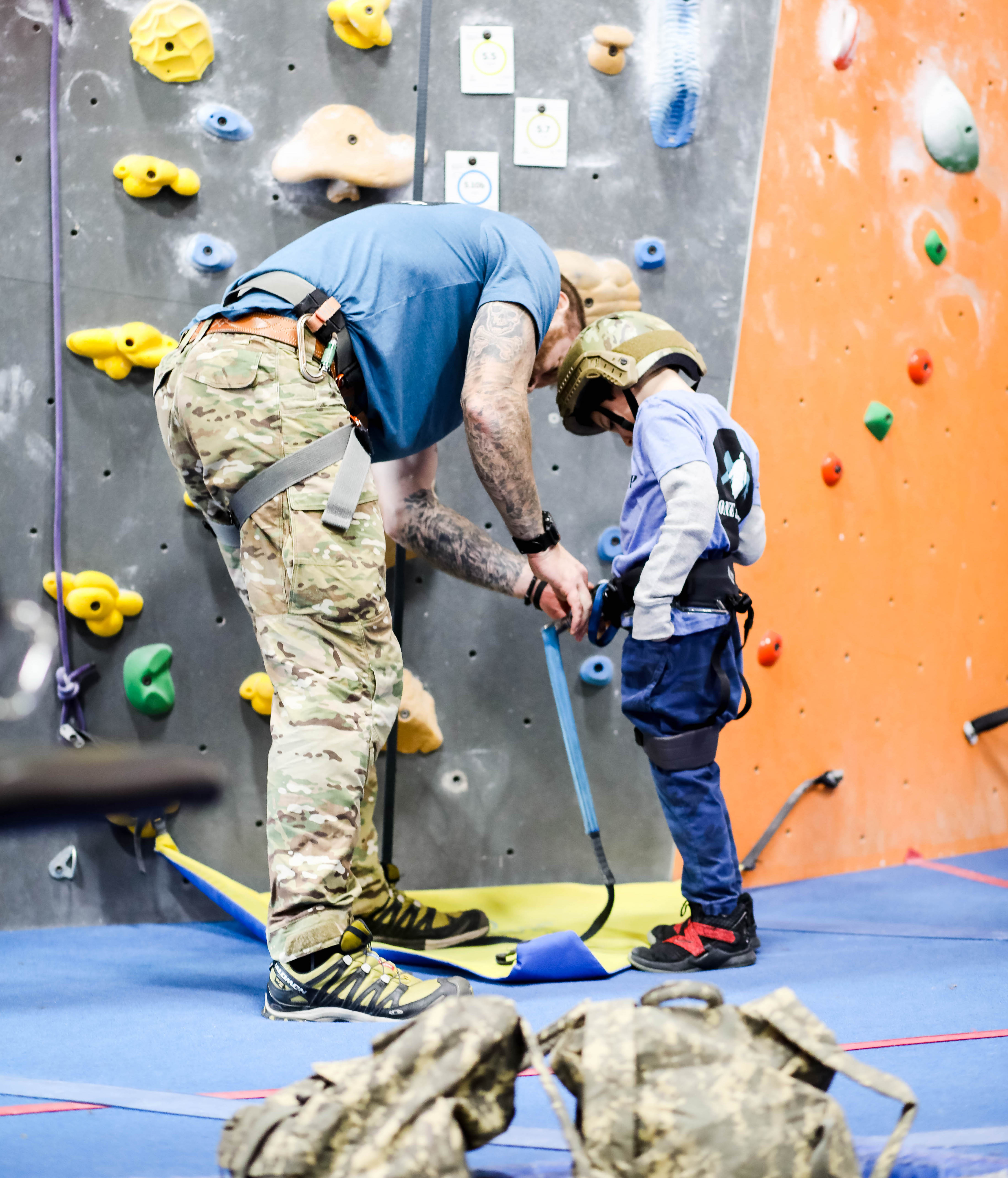 Everyone at One Summit has been so nice to us and we are just so appreciative and grateful to be involved.

For our kids, I think as they get older and they better understand the sacrifices that service members make for the community and the country, then they will appreciate the experience that much more. For us as parents, One Summit personifies what's right with this country - charity, sacrifice, helping the sick. These are so core to the American experience that it warms our heart to be a part of this organization. It has been so humbling to meet the team that not only sacrifices so much for us but continues to sacrifice and volunteer to help children. It inspires us to find the energy and the time to give as well.

“Always be hopeful but remain realistic.” 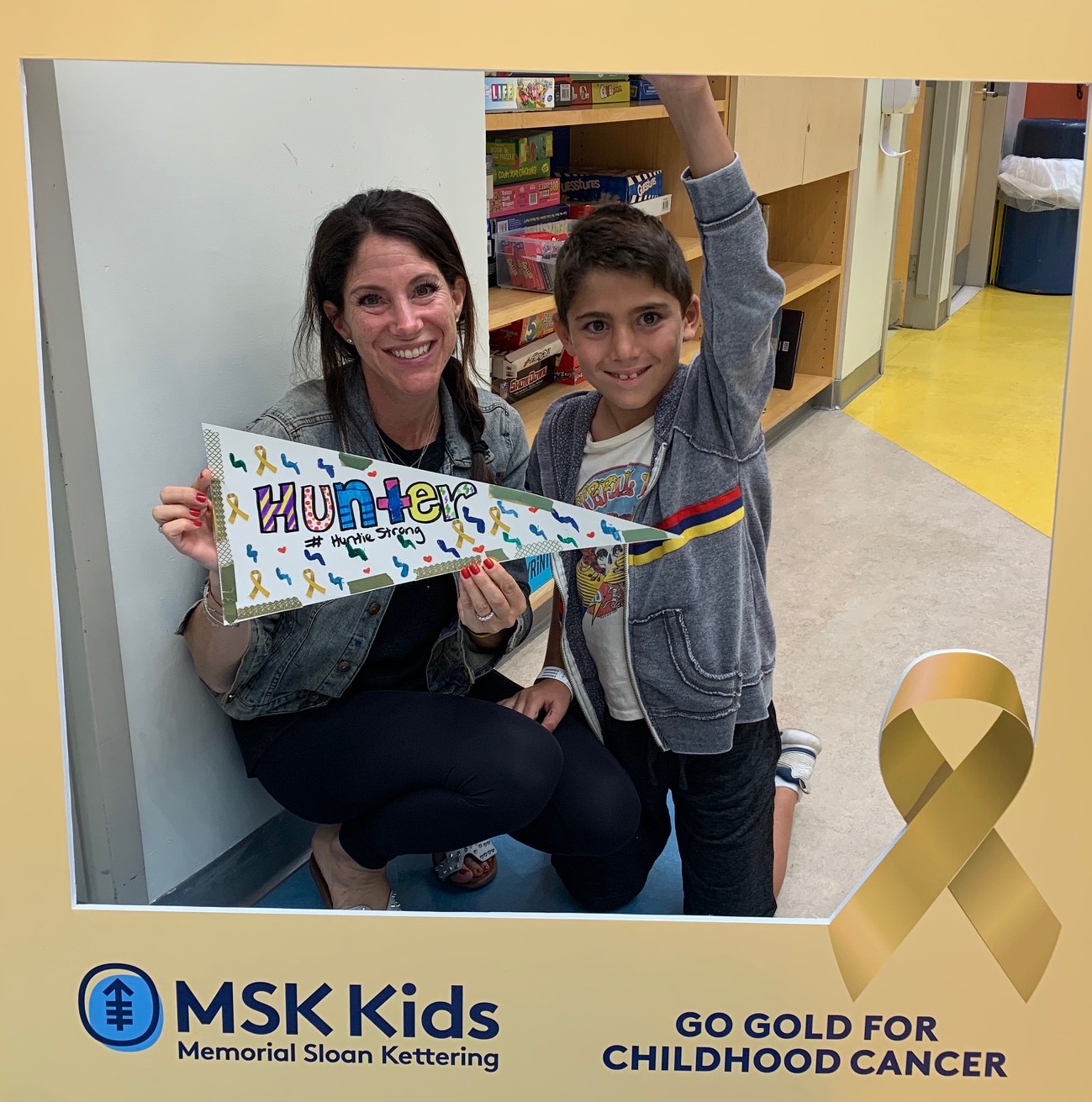 Hunter handled most drugs relatively well except for one drug Dexamethasone – a chemo-strength steroid. While on this drug his entire personality would change. It felt as though we were losing our little boy. With every drug came its short and long term side effects. As a parent it is hard to get past the worry of the long-term effects these drugs can have on your child. Because many of these drugs can cause side effects such a weakness, loss of endurance, neuropathy, and many other delays he began intensive speech, occupational, and physical therapies. Hunter was at a very developmental time in his life, so seeing these setbacks became heart breaking. As parents, you can’t help but wonder what is going on in their head, wondering what they would remember and how it would affect their future.

But, you become extremely knowledgeable and realize you have to become your own advocate and stay optimistic. My wife jokes that she became a “Mom-cologist.”

“Tackle your challenges one step at a time.”

Our Climb for Courage experience was a first: we gave birth to our third child the night before the event. I remember being in a complete daze trying to figure out what the upcoming day was going to be. I was excited for the boys, but I was also nervous and hopeful about the experience. In my gut, I’ve always felt apprehensive about their ability to tackle tough physical challenges. I remember meeting and looking at the SEAL Team members and briefly meeting their mentor. My fears were alleviated when I caught a sneak-peek at one point and was surprised to see how high Hunter and Reid had climbed.

The kids were so excited and proud when I picked them up. The whole experience just really resonated with them on a level that they couldn’t articulate, but I could see it in the expressions on their faces.

The biggest change I’ve seen is the growth in Hunter and Reid’s ability to challenge themselves, tackle tasks step-by-step, and their willingness to practice the things they aren’t naturally good at. That type of grit and determination are really important characteristics and traits that are important at any age. I constantly tell them that you get knocked down in life and you can either quit or pick yourself up and try again. This is the most important lesson they and us, as a family have learned. 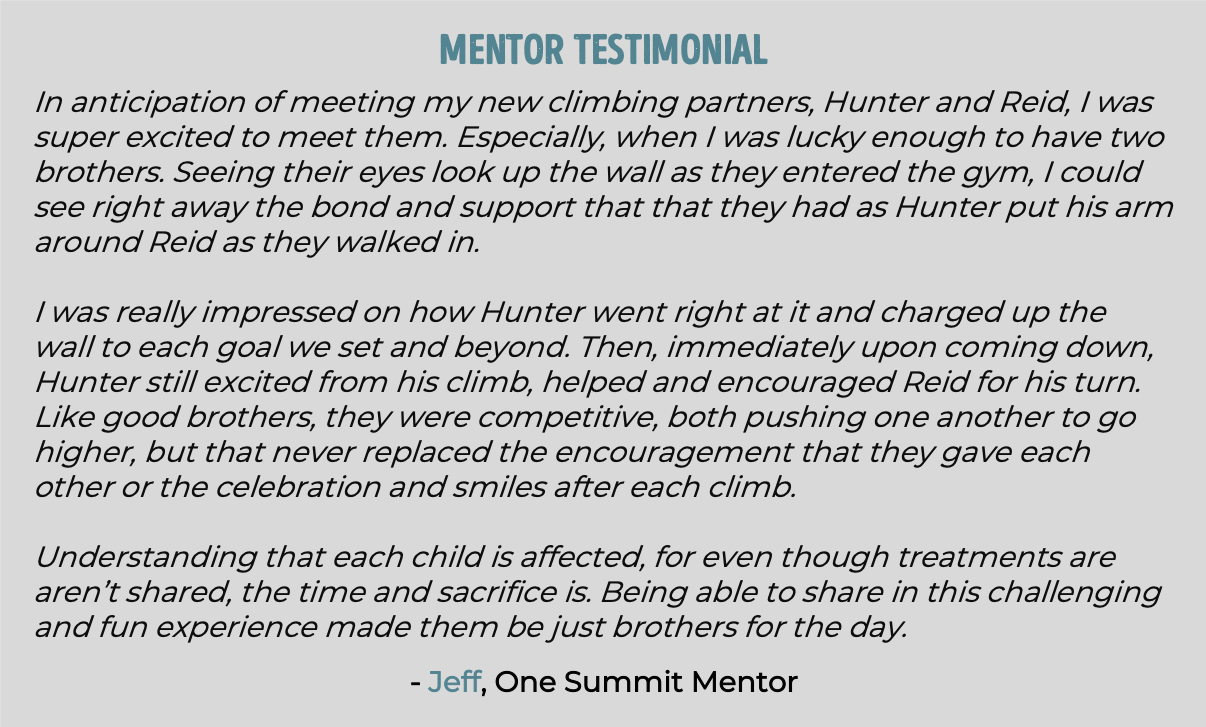