Profiles in Resilience: The Khan Family 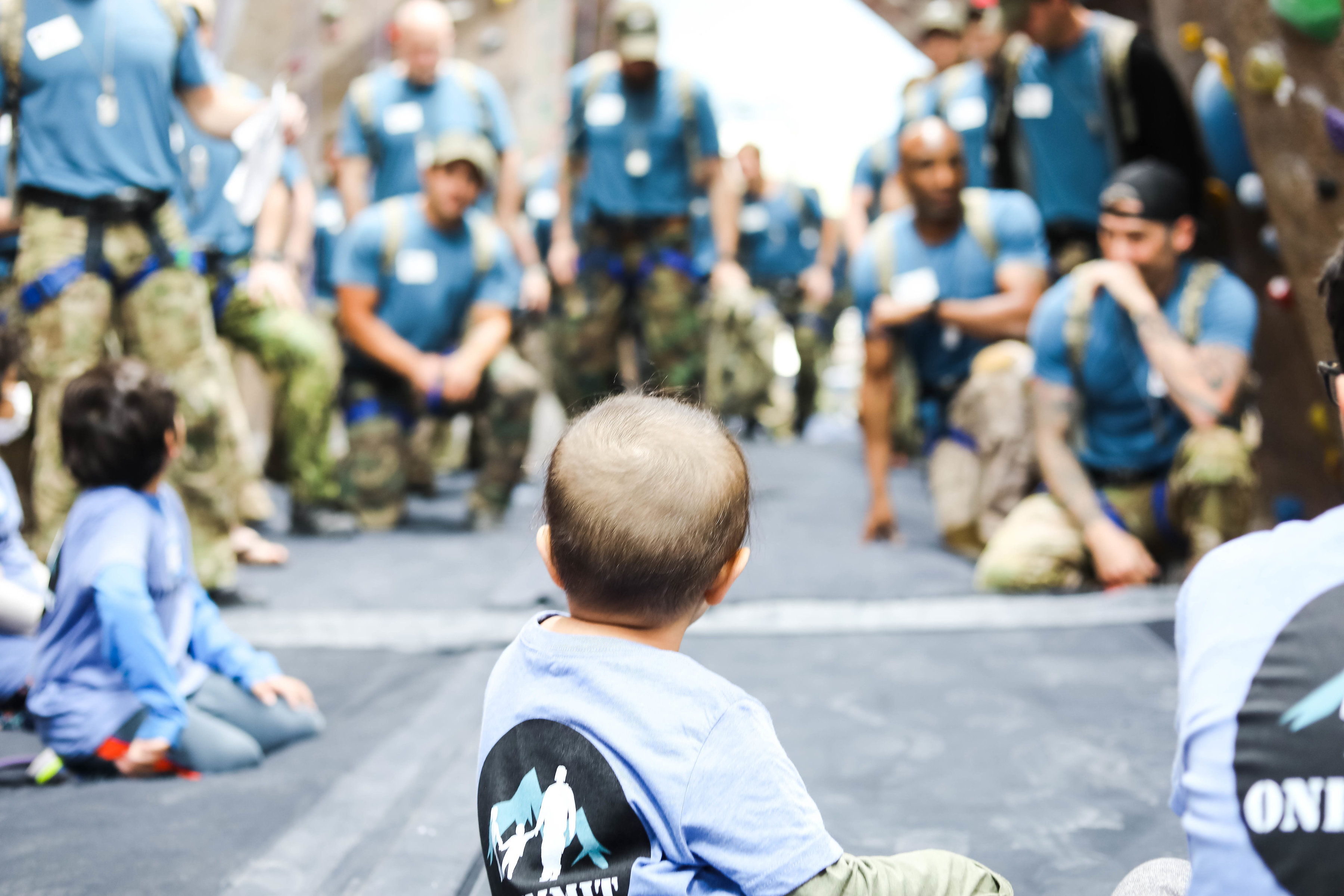 At One Summit, we recognize that we have the opportunity to create many moments for our families and mentors worth capturing on camera – whether they be at one of our Climbs for Courage, community events or elsewhere. What captivates us about these images is not so much the aesthetics, but the memories, stories and relationships behind them.

When we received the photos from our Climb for Courage, San Diego program held in March 2018, there was one photo in particular that seized our attention. This one.

While it perfectly embodied the welcoming, supportive and inspiring environment we strive to create through each of our programs, it was the broader perspective that made it all the more meaningful for our team and those who were on-site. The photo only became more captivating with time, as we learned more about, and built our own relationship with, the Khan family. 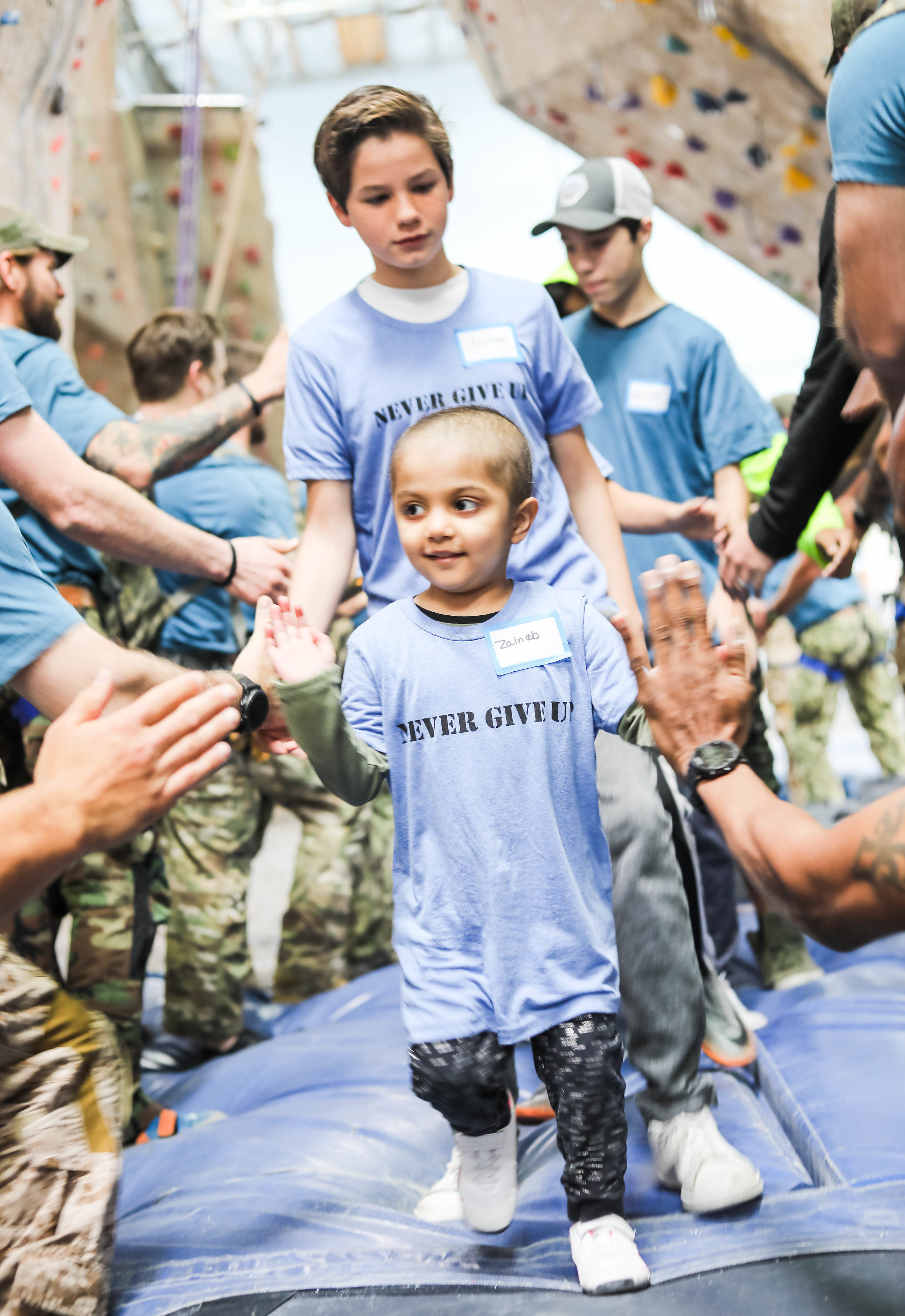 From our perspective, it was unfortunate that the Khans were even introduced to One Summit in the first place. It meant they found themselves in an earth-shaking fight. Akbar and Naureen’s daughter, Zainab was diagnosed on April 17, 2017 at the age of three with Pre-B ALL (Acute Lymphoblastic Leukemia). For the entire Khan family, this fight brought one thing above all: a new reality. What happened thereafter provided anything but the time and support they needed to adjust to their new normal, only making it that much more apparent. As Naureen recalls: “My mom was in New York and wanted to get all her doctor’s appointments out of the way so she could stay with us for a long period of time. She had a mammogram the day after Zainab’s diagnosis and was quickly diagnosed with breast cancer herself. It was an aggressive form that was thankfully caught early due to my mom bumping up her appointment to be with us. Despite everything, after having her lumpectomy she came to San Diego to spend a few days with Zainab before starting her own chemo regimen.”

Shortly thereafter, the health of Akbar’s grandmother also began to decline, with her ultimately passing away from her own battle with cancer in 2018.

Each member of the Khan family processed things differently. At moments, they felt the winds of the storm they found themselves in trying to shake their foundation. These moments were only elevated when they reflected on how things used to be. “We were a traveling and adventurous family. Right before Zainab was diagnosed, we road tripped through Arizona and hiked in Sedona and the Grand Canyon. Then everything came to a halt.” Zainab, an innately positive, active and adventurous kid ever since the Khans can remember, suddenly began to use the inverse of her once favorite phrase: “I can’t do it.” Her older brother, Amaan – more reserved, cautious and risk-adverse than his sister – was also having “a very difficult time with his sister's treatment, both because he cares for her but especially as it resulted in less parental attention on him and his interests.”

When the Khans heard about One Summit and Climb for Courage on WBZ Radio, through a family who had previously participated and on a “Warrior Parents” Facebook page, they saw it as an opportunity. An opportunity to rebuild and reclaim. But they were hesitant. Zainab was in the midst of chemo, only heightening their natural reaction of wanting “to keep her in a bubble.” They “were nervous and anxious to let her do a thing.”

So, it was at this time that they had a conversation with One Summit’s Executive Director, Dianne Lynch. The phone call started by discussing whether Zainab, who was four at the time, would be too young. Akbar then stressed that “Amaan needed it more.”  After learning more about both of them, Dianne offered comfort in the form of two sentences: “I have the perfect person in mind for Zainab. They both need to come.” 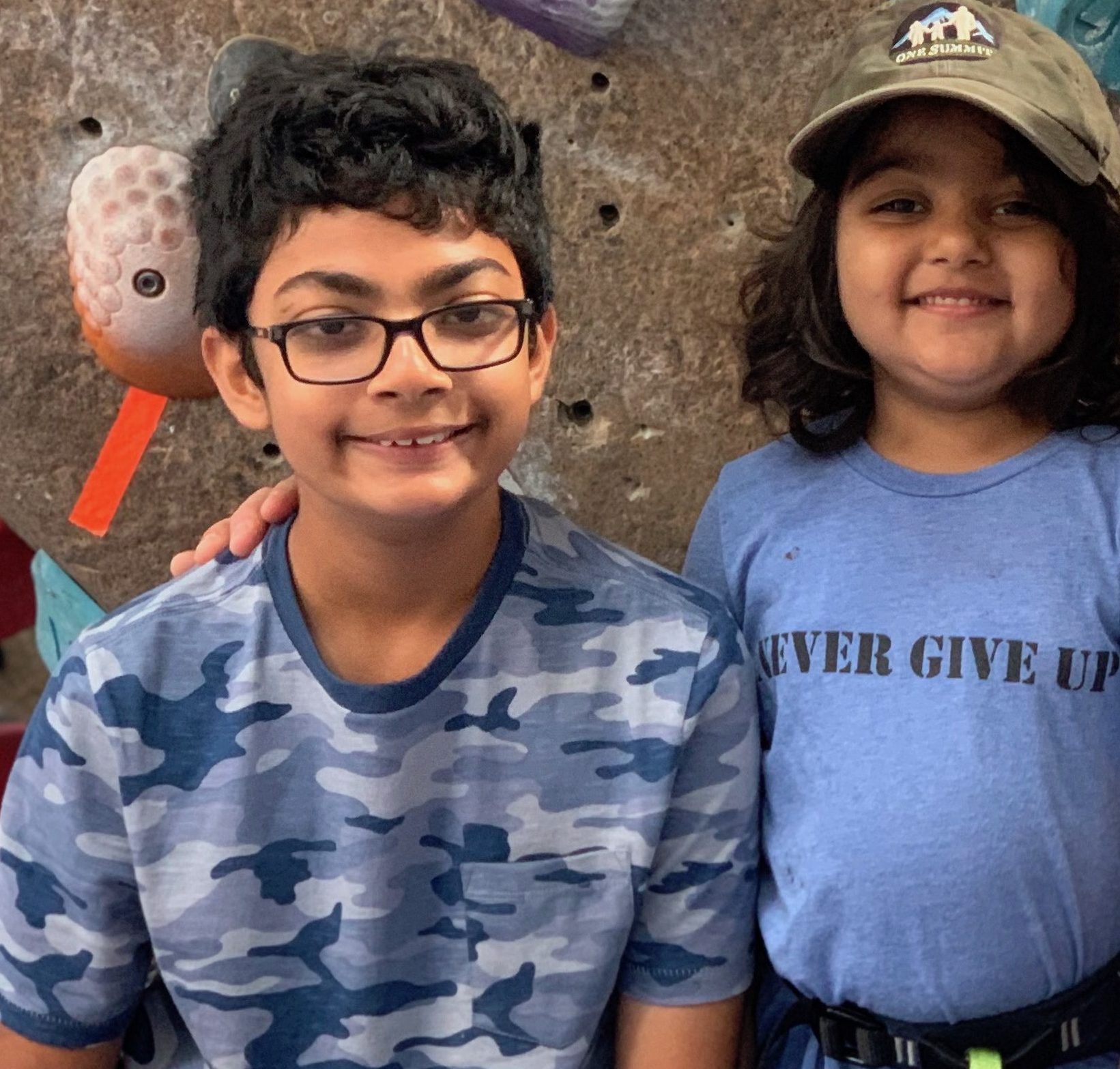 The person Dianne had in mind was an experienced One Summit mentor named Sully. Sully knew what he was in for when he opened the envelope he received at the Mentor Dinner the night before Climb for Courage, San Diego 2018 and read the following about the little warrior he was to be matched up with: “Zainab is highly focused on using her princess power and will proudly tell anyone who will listen that pink is her favorite color.” Together they spent the day playing an endless game of “Hide-and-Seek,” uttering more laughs than words.

Amaan’s match with his mentor, John K. also seemed to be a fit. As Naureen recalls: “He flat out refused to go rock climbing previously, but John was able to make him comfortable and even got him to reach the top! Now he thinks before saying “no” right away.”

But only time would tell whether the new connections established at the climb would flourish into something bigger. The first indicator of growth came six months later when the Khans and One Summit reconnected for a private tour of the Navy base on Coronado Island, alongside a handful of other families. Akbar mentioned in passing that Zainab and Sully had been sending funny videos back-and-forth since the event and that Sully had helped “arrange for our family to visit the field at Fenway Park during a family trip last summer, which was very memorable for us all but especially Amaan, given his love for baseball.”

The second indicator followed. Amaan and his mentor had been exchanging periodic letters since the event – letters that encouraged him to get on the pitcher’s mound himself.

Things came full circle when the Khans were asked to speak to a room full of Navy SEALs at the Mentor Training Dinner the night before Climb for Courage, San Diego 2019 held this past May. They took the opportunity to reflect on on their experience at Climb for Courage and the impact it has made on their collective outlook: “We’re so glad we did it. Seeing Zainab so happy right after the climb...smiling, socializing, laughing...reminded us that she was ready to be out of the bubble and thrive. Today our whole family is stronger, has a positive outlook and doesn’t let cancer stop us from doing everything.”

These changes were further emphasized two days later at Climb Higher when the Khans & Sully reflected on their first memorable experience together, now 14 months removed. “Since that day we’ve been out and about and going on adventures again!” says Naureen. 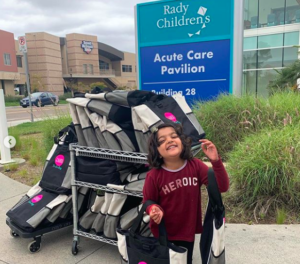 One of those adventures is driven by the Khans desire to serve on behalf of other families impacted by cancer. They developed Z Kits with a mission of “inspiring resilience by providing small tools to make a big difference at the start of a family’s fight against cancer.” On April 17, 2019, the exact day Zainab was diagnosed two years earlier, the Khans delivered 38 Z Kits for the 38 beds in the oncology unit at Rady Children’s Hospital, the hospital where Zainab will continue to receive maintenance treatment until August 24, 2019. The tagline for the initiative?

We can’t wait to see what images Zainab, Amaan and the Khan family inspire themselves.  And – most of all – learn more about the memories, stories and relationships behind them. 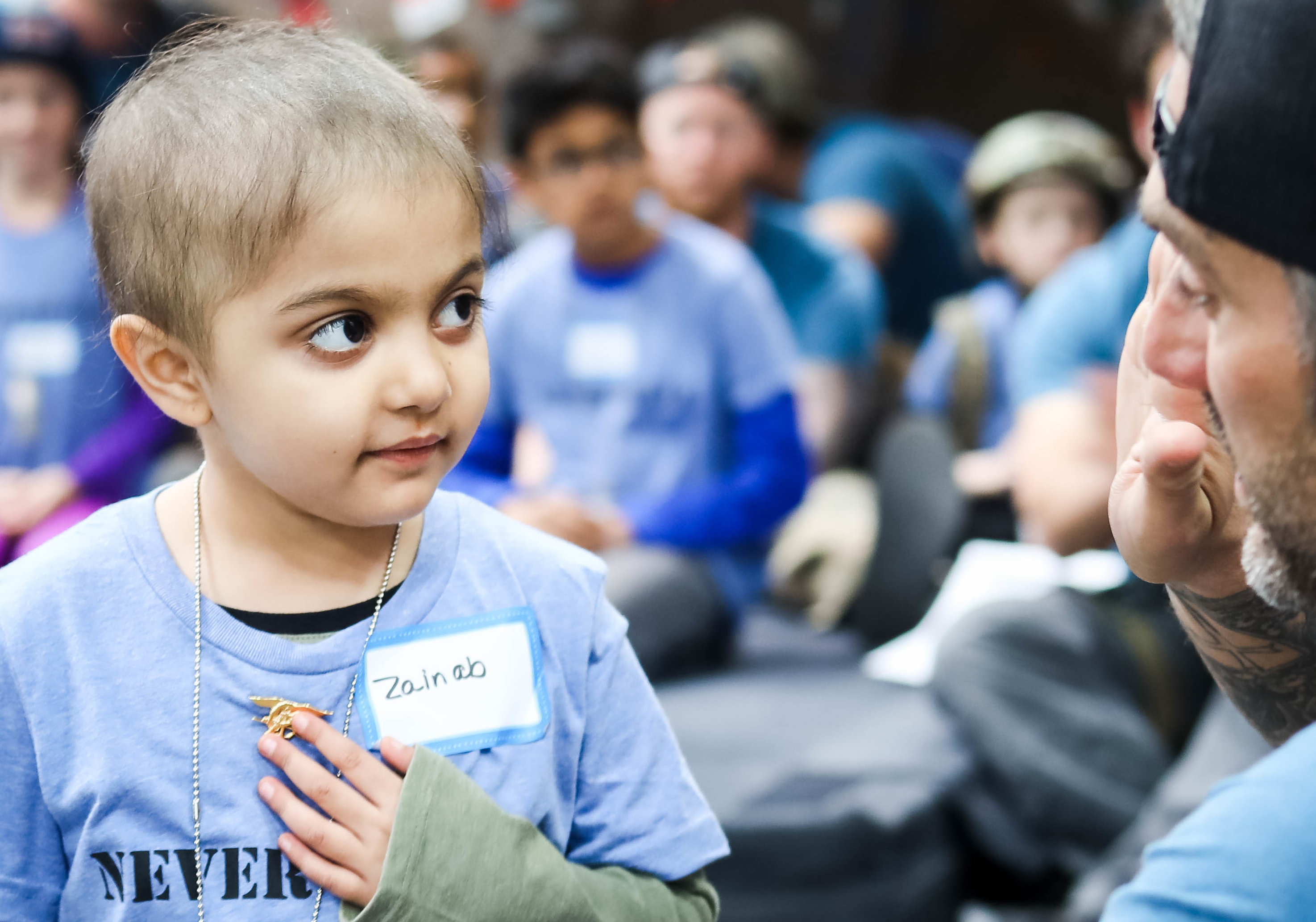