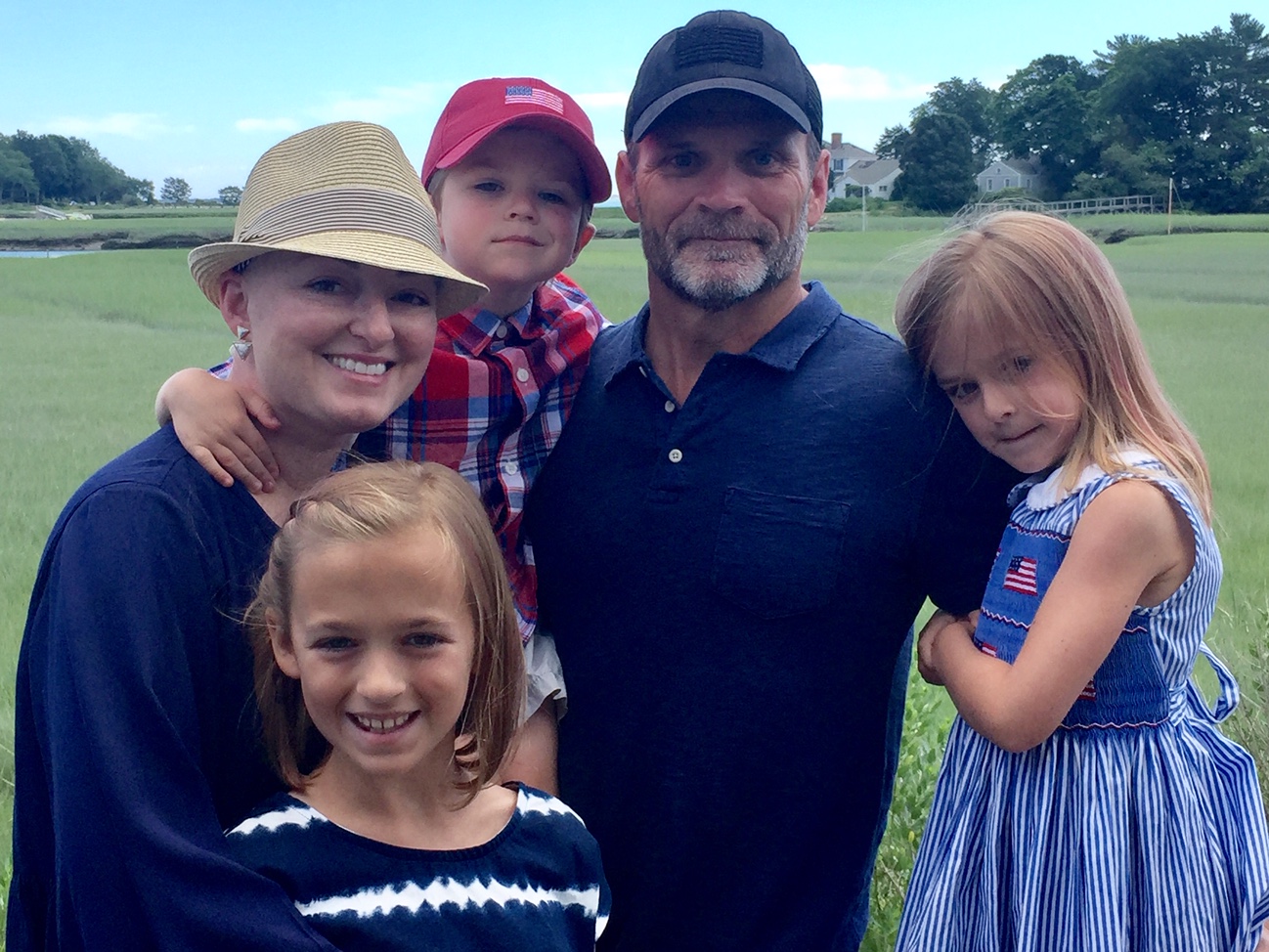 As we waited for the kids from Dana-Farber to arrive by police escort, everyone at the very first Climb for Courage in 2014 was a little nervous. How quickly could these young cancer patients bond with the platoon-sized group of grizzled Navy SEALs? How fast would the mutual trust flow? Meanwhile, one person was coolly climbing to various perches on the different walls, camera in tow, checking for angles, visualizing shots of young dreamers reaching their goals. Her athleticism and composure radiated a steady confidence. That continued as the patients arrived, and soon the belay stations and the walls were filled with action, with wide eyes that eventually crowned wide smiles. All captured in Rachael Fussell’s amazing photographs.

Rachael’s life journey is a model of the resilience that One Summit hopes to build through climbs, storytelling, and supporting events. She grew up in Roanoke, VA, one of five children raised by a single mom. As Rachael puts it, “we all knew we would have to work hard in life.” After high school, she moved to Virginia Beach and lived with an older sister and her family. She built trust — at home, at community college, at a rock climbing gym, and especially at work in a Norfolk architectural firm. As she recalls, “that trust really built my confidence as a professional and created a new sense of empowerment for me.”

Among her mentors were “several old salty” SEALs who taught her “everything I know about climbing” and who are “still part of our family.” She also met Jon Fussell, whose humble bearing “made a big impression.” “Fuss” introduced her to his circle of SEAL families. She was sold on the community. They married in 2006 and started a family — Reagan (2007), Scout (2009) and Carter (2011). SEAL training and deployments did not provide Jon with much time at home, so Rachael felt blessed with neighbors who “delivered meals, had weekly play dates, and checked on me constantly.” She still had to cope with uncertainty. In Jon’s words, “dealing with the constant lack of information and control while raising a family is what I find most amazing about Rachael and other SEAL wives whose husbands are overseas fighting.”

The strain was not just from Jon’s absence. It was also from the drumbeat of deaths and burials during that time. Casualties in special operations are proportionately much higher than those among “regular” military units. And training is often as dangerous as the actual missions. Rachael and Jon lost many friends. As Jon says, "for those who lived though the losses of 2007-2011, the pain rose to a never-before-known level.” Rachael still struggles with it, 4 years after Jon’s retirement to civilian life. “You feel guilty because your spouse survived. Or you couldn't stomach one more memorial service, so you didn't go. I called a friend before Christmas and I had to clarify that nothing was wrong. Usually a phone call instead of a text means bad news. That's a sad truth we live with in our community.”

For a SEAL spouse, coping with loss usually means action. “I think most of the women in this community are do-ers. We couldn't live this life if we weren't.” When bad things happen, “we roll up our sleeves and get busy.” For Rachael, this included pouring her energy into the All In All The Time Foundation, formed to memorialize Tom Valentine, a celebrated SEAL who died in training in 2008. “Christina [Tom’s surviving spouse] was a huge inspiration for me. It's very healing to help others — and to know that if, God forbid, something else happens, you can make a difference for that family.” 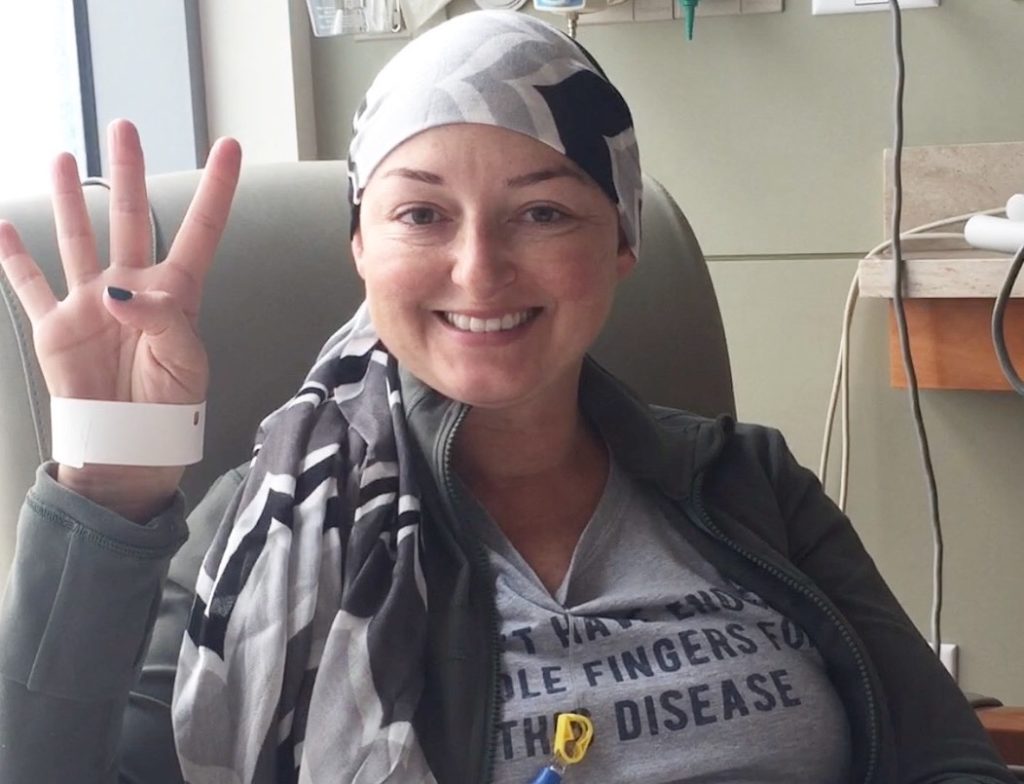 Living in the civilian world of Greater Boston did not shelter Rachael from seismic trauma. In 2017, she was diagnosed with Stage II breast cancer. As hardened as she was at 39, she still “hid behind the couch” to take the doctor’s call “so the kids wouldn’t see me upset.” But then, as Jon says, she summoned all those lessons from SEAL community life to take treatments “with tenacity” at Dana-Farber Cancer Institute, the very hospital where kids she photographed at the first Climb for Courage were also treated. The bonds she had forged with others in Virginia and Massachusetts now also braced her. 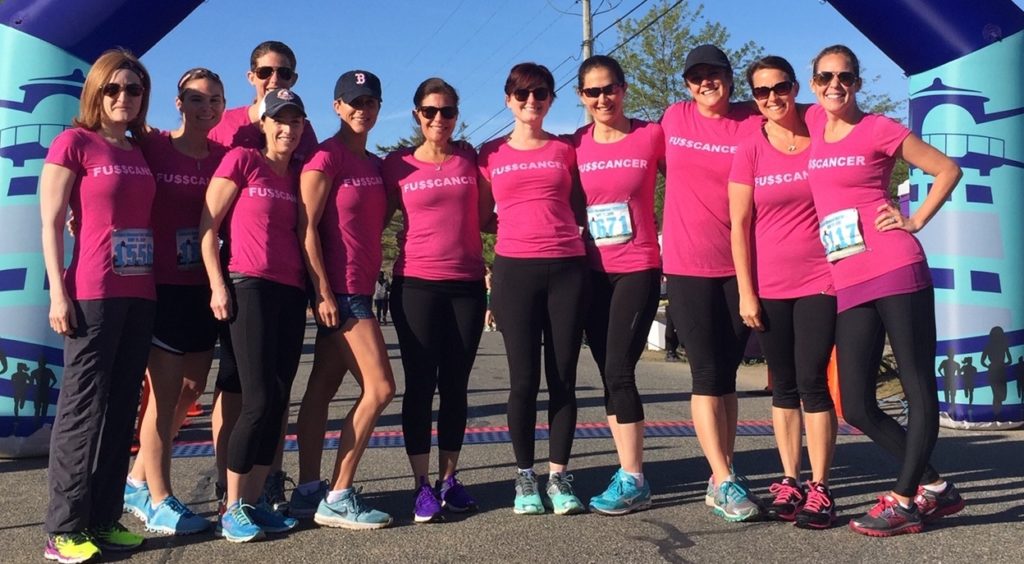 “Never being afraid to ask for help or accept help was so important. Our community in Scituate stepped up and made meals, drove the kids around, and drove me around. I think the entire town dyed their hair pink. My SEAL family wives all got on planes and flew to sit with me during chemo. They sent care packages, texts, and funny videos — always letting me know they were thinking about us if they weren't able to be there. They lifted me up this time.”

It was at this time that Dianne Lynch, One Summit’s Executive Director met Rachael. As she recalls, “Rachael helped me understand the need for us to further involve the wives and significant others of our mentors. It was clear they had more to give and it was our responsibility to give them that opportunity.” It was this insight that led One Summit to develop a formal Team Leader program, introduced at Climb for Courage, NYC in October 2017, where Rachael led the way.

The Fussells moved to South Carolina in 2018, where they are forging new community bonds. Rachael’s health is improving despite many long-term side effects from the chemo and radiation. The latest scans were clear of cancer. One Summit looks forward to seeing Rachael again at a Climb for Courage, sharing her story and practicing her special combination of skills. Many people can climb and many can take pictures. But try doing them together. In Rachael’s words, “those are 100% Mom skills,” because “nothing prepares you for going climbing with three small kids.” And the lessons come right out of the playbook for a SEAL mission, a cancer treatment, or a Climb for Courage. You make a plan, you set goals, you pack up, you hike in, and then you have a small window of time. Things can change quickly. “You might get 2 hours or 10 minutes, so you gotta be flexible in your expectations.” 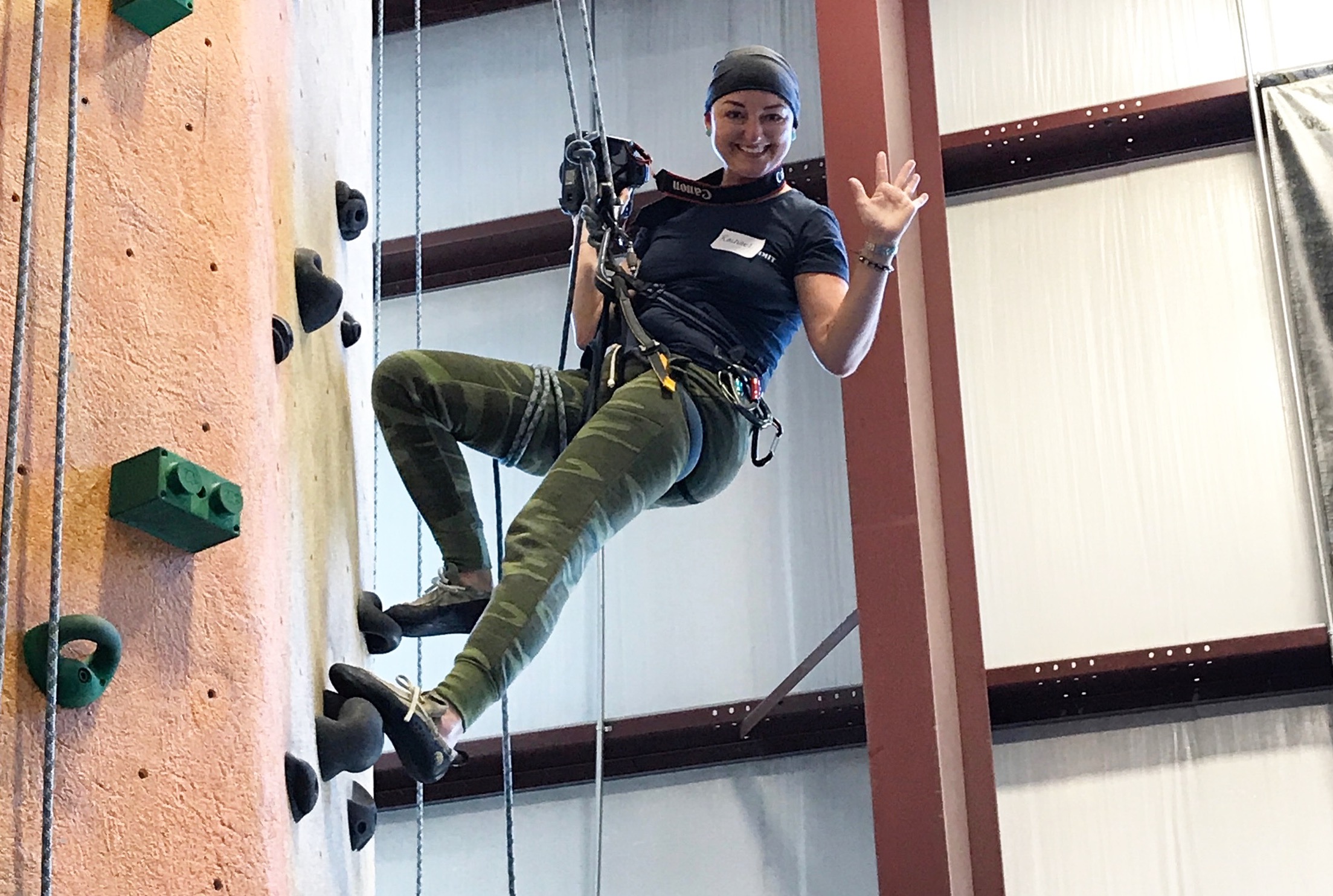 Rachael’s photographs and story are inspirational. But she is just as inspired by One Summit. “I truly believe that the guys get just as much out of the Climb for Courage as the kids do. It's my favorite thing about the program. I love the lifelong friendships that they are forming. In the teams, in cancer, in life — it's all about the people you surround yourself with that step up for you. Knowing these kids are now a part of a community that never gives up, and never gives up on each other, makes it just so much sweeter.”