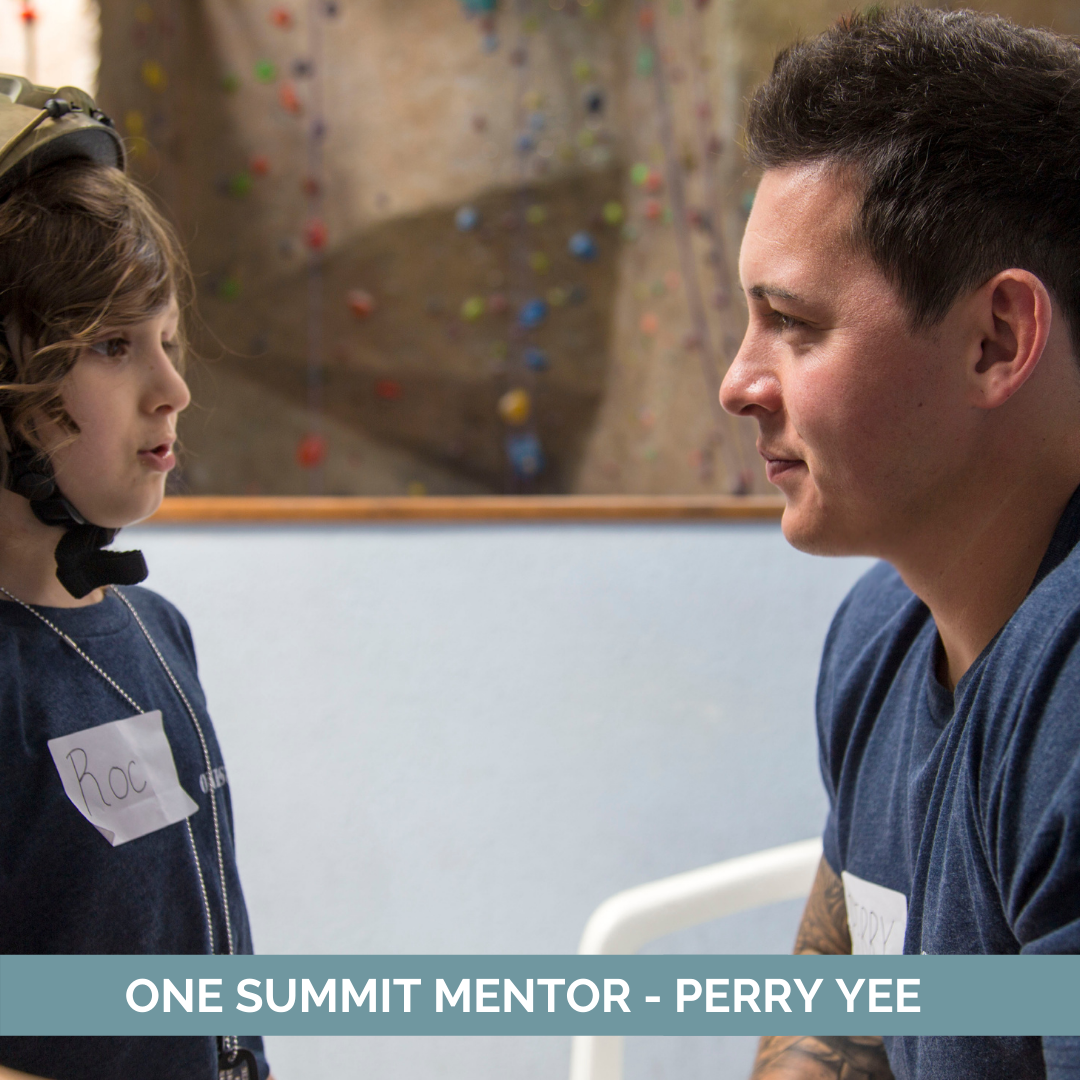 The Value of Mentorship and On-going Relationships, with One Summit Mentor Perry Yee

By Kara Pogue, One Summit Contributor and Team Leader

In our fast-paced, over-scheduled, hectic day-to-day lives, it’s easy to think we’re too busy to make yet another commitment, even if it’s for a good cause. But Mentor Perry Yee made no excuses when he first heard about the opportunity to get involved with One Summit. In fact, he reached out about volunteer opportunities at the same time he and his wife were busy starting their own non-profit organization to benefit children of our nation's fallen military heroes, referred to as Gold Star Children.

Perry and his wife Jamie jumped right into service with One Summit, taking part in the first San Diego-based “Climb for Courage” event in 2017. At Climb for Courage events, pediatric cancer patients and their siblings are matched 1:1 with a U.S. Navy SEAL and guided through a series of rock-climbing challenges and a learning curriculum based on teamwork, goal setting and overcoming adversity. Their experience coupled with the long-lasting relationship formed with their Navy SEAL mentor provides each child with the additional source of strength and encouragement they need in their battle against cancer. 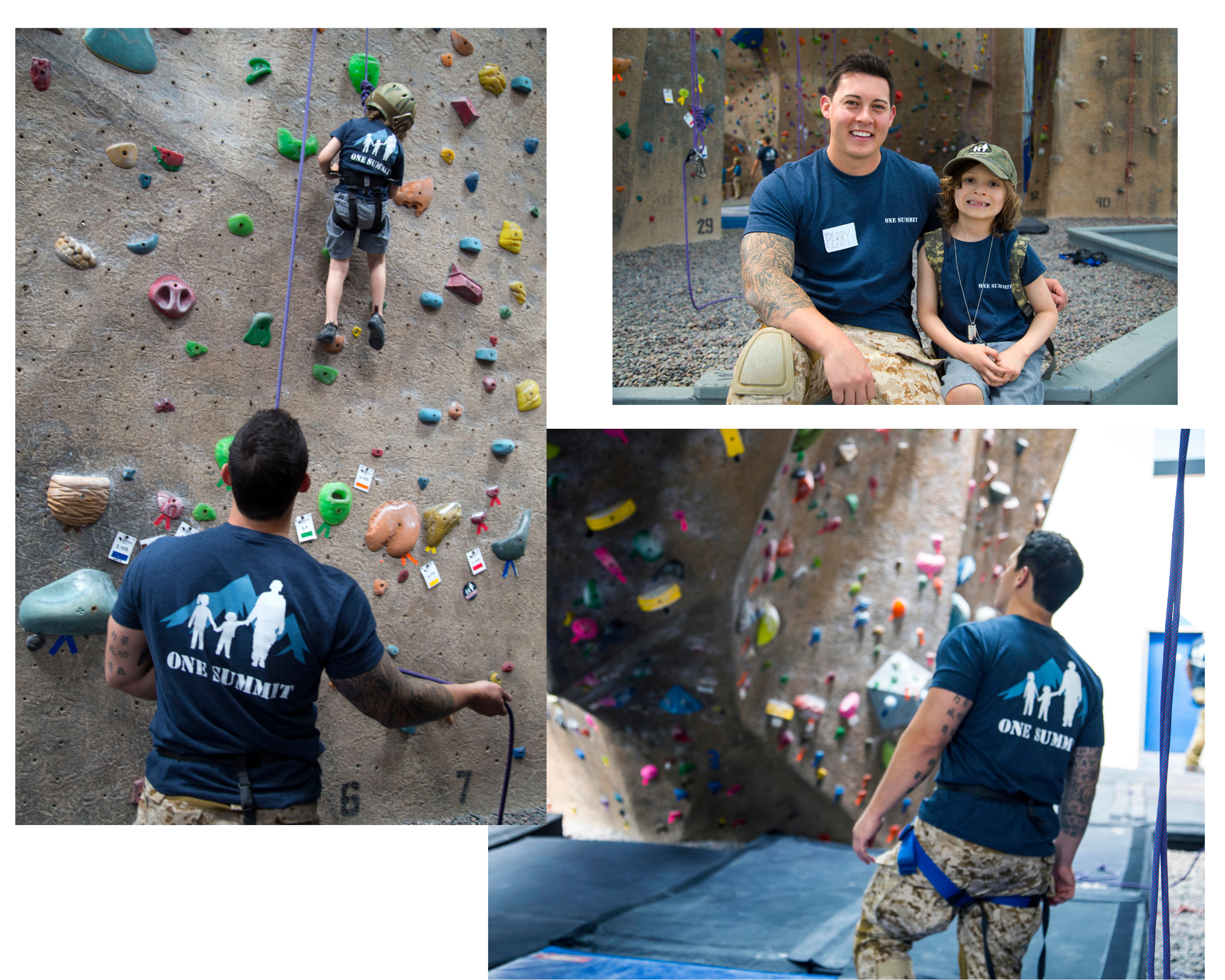 “It’s obviously very easy to get caught up in your own world and things that are happening around you,” says Perry. “And it’s funny, we’re talking about profiles in resilience, and that’s something you learn a lot from these kids. We see it a lot, as well, with our Gold Star Families. These kids have gone through so much trauma and things that kids should not have to go through. You see so much strength and perseverance in them.”

Perry, a veteran Navy SEAL, was first paired as a mentor to a five-year-old boy, Roc, who was fighting cancer at the time. He had such a great experience working with the kids and fellow SEALs that he’s continued serving with One Summit in the years since, volunteering at Climb for Courage events in San Diego, New York, and Boston. He’s had the opportunity to mentor several children along the way.

“You're seeing all of them overcoming the challenge that’s ahead of them, and obviously compared to what they’re going through medically, it might not be very much, but you can just see the drive they have inside them.”

Perry has made efforts to stay in touch with many of his mentees in one form or another, but of all the families he’s met, it is that first match that’s stood the test of time. He’s built a lasting friendship with Roc and his family over the past five years. They’ve met up to watch movies, go skateboarding, and even to celebrate birthdays and other holidays. He was even at the hospital when Roc, who is now cancer-free, was going through one of his final treatments. 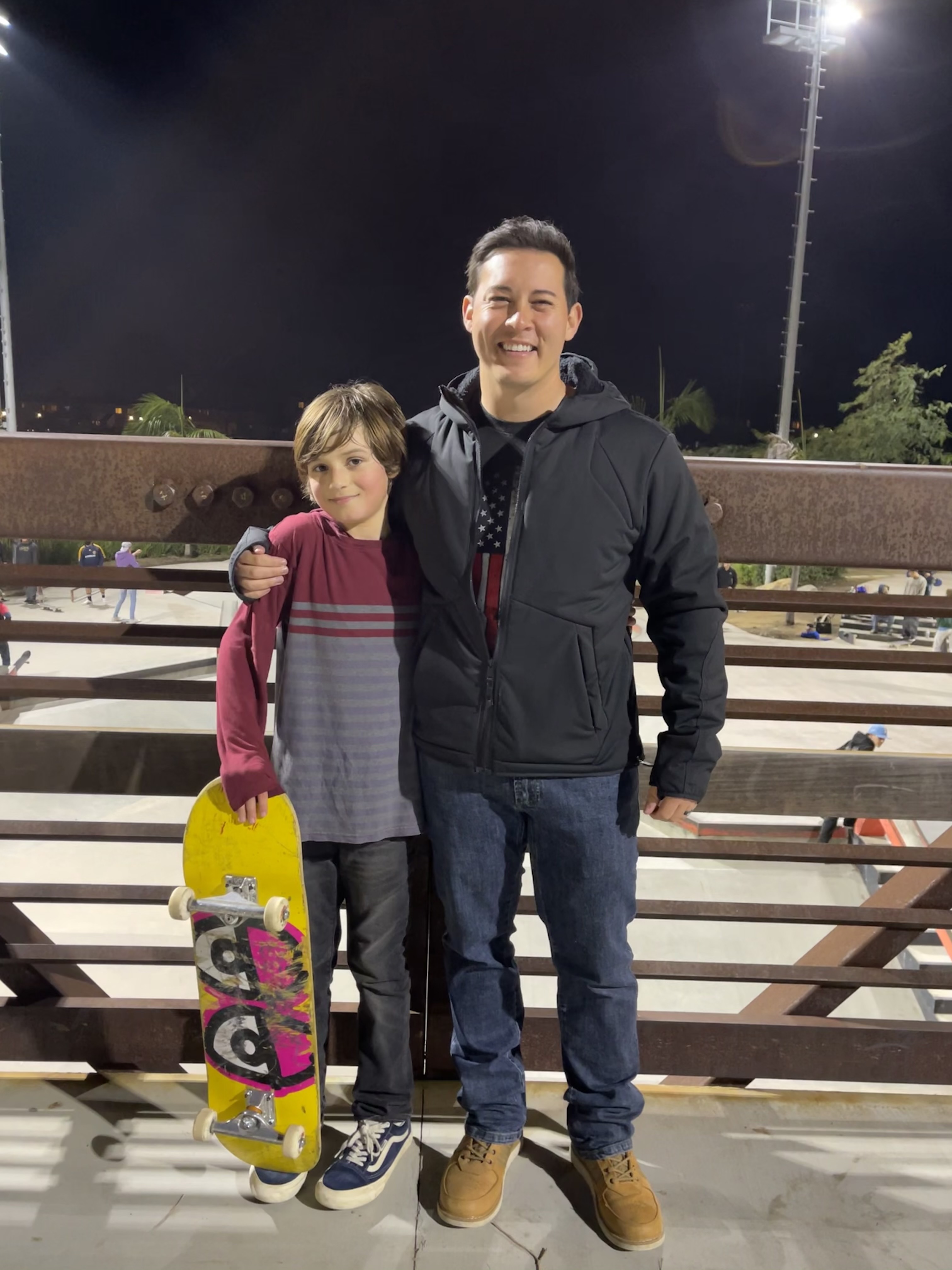 Continued connection is encouraged for One Summit mentors. Perry has gone above and beyond, partially due to Roc and his family’s proximity to his home, but more so because of his desire to give back to others.

“I love to be able to give back to youth, being able to have that mentorship role,” he says. 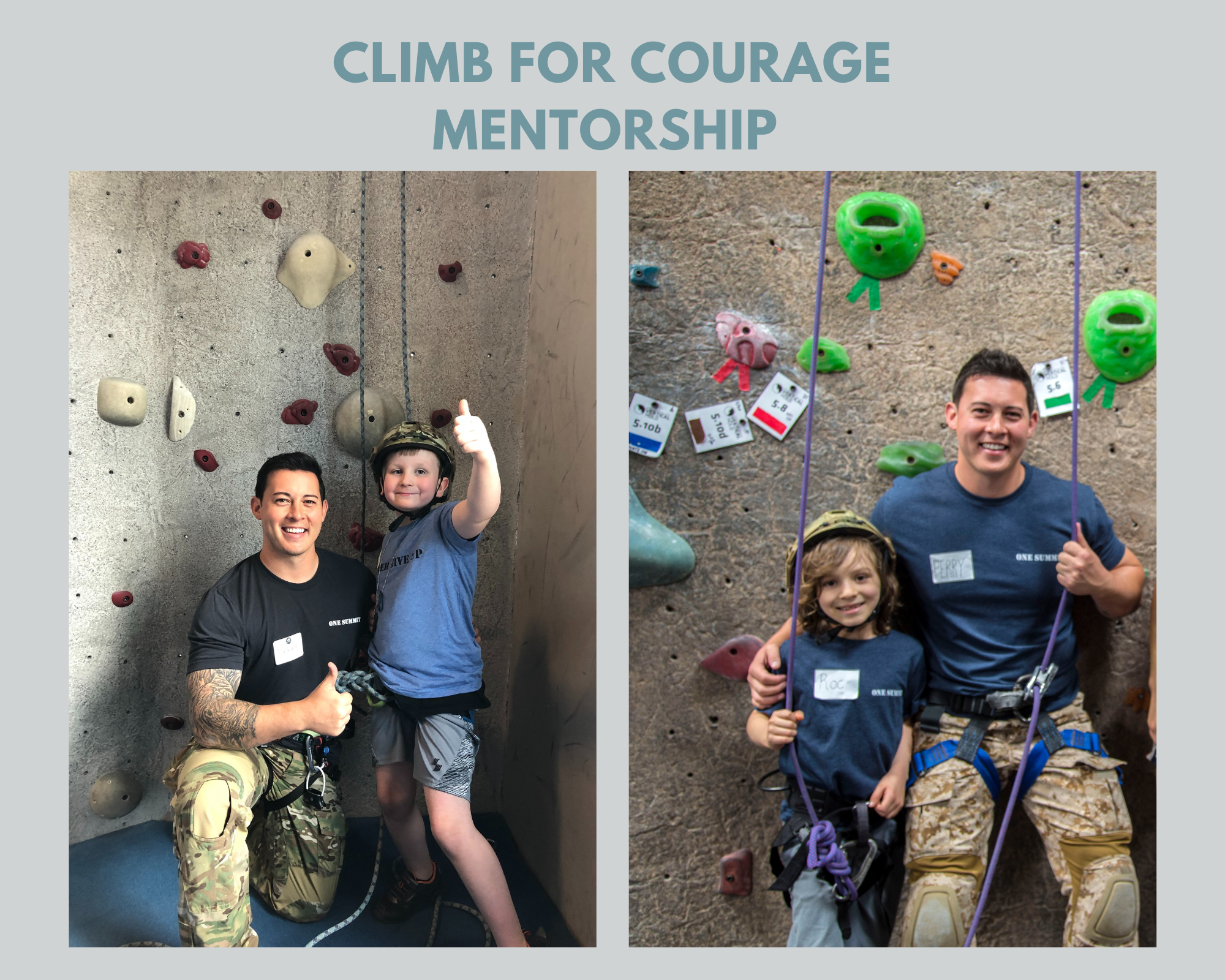 Mentorship is a common thread between One Summit and “Active Valor,” the non-profit Perry founded with his wife. Together they run the organizations’ “Valor Adventures,” a program that pairs veterans as ongoing mentors to children of our nation's Gold Star Children. The Veterans and kids participate in specially designed Mission-Based Adventures that develop their creativity, communication skills, confidence levels, problem solving abilities, and most importantly, allow the children to just be kids for the day.

Past Valor Adventures have included mission-based treasure hunts, with land navigation exercises; a very popular Zombie Hunt; and they’re preparing for a laser tag event, which will take place in June. This is the third year the organization has coordinated an event over Father’s Day weekend, bringing some joy into what is likely a very challenging occasion for the Gold Star Families.

“Being a vet myself, there’s really no bigger honor than being there for the family of a fallen brother,” says Perry.

The organization currently serves 41 Gold Star kids that comprise 25 Gold Star families. Once a child is paired with a mentor, that child and mentor stay together for each event they attend. They become friends, and often like family.

Whether talking about Valor Adventures or One Summit, Perry is passionate about mentorship and the power that building sustaining relationships can have for the kids we’re investing in.

“Something you say to them, something you do with them might have the ability to change the trajectory of their life and have an influence on who they are as a person and how they grow,” he says.

“For me, being able to really touch someone’s life like that and have them touch yours, it’s all worth it.”

To learn more about Active Valor, check out their website. 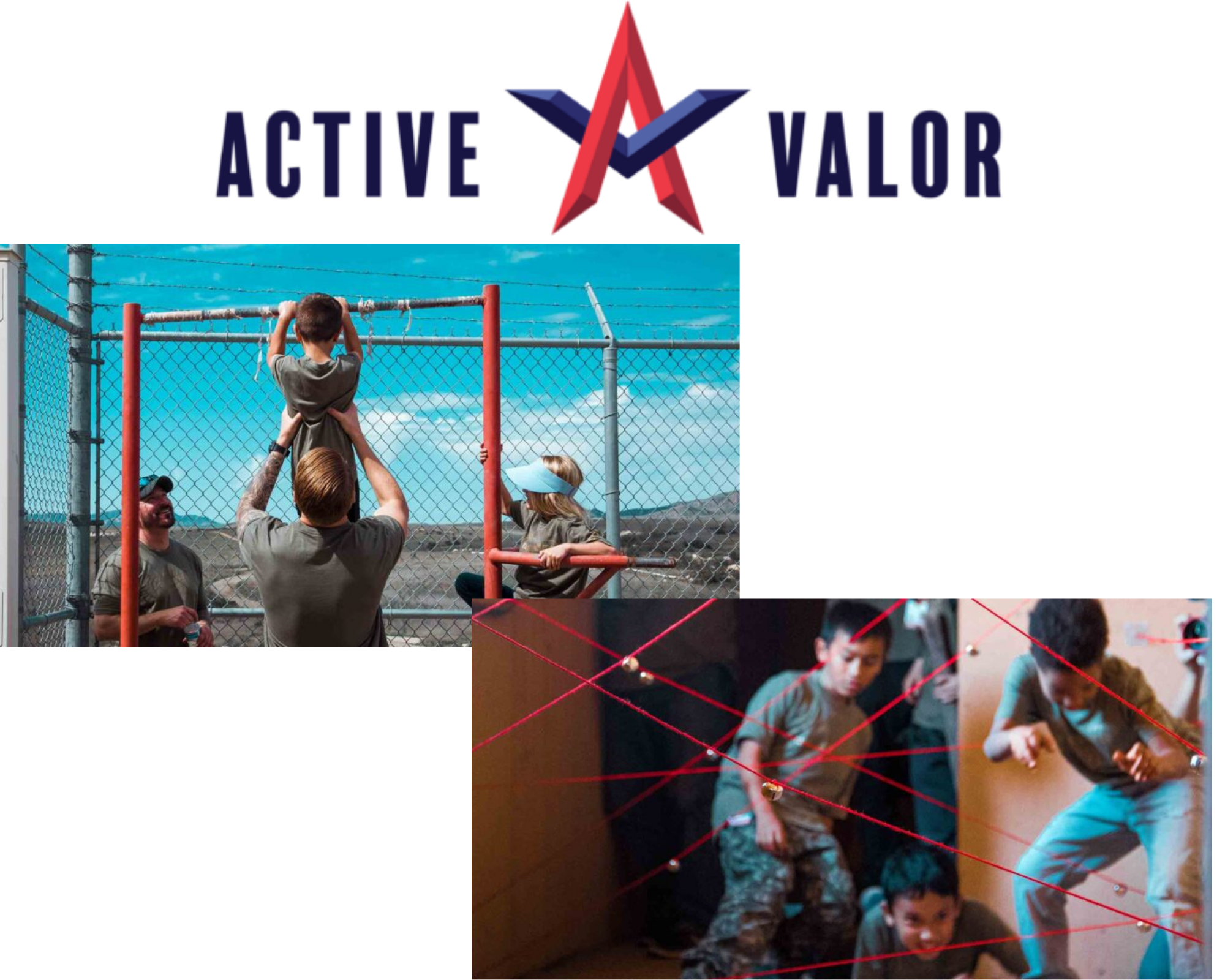