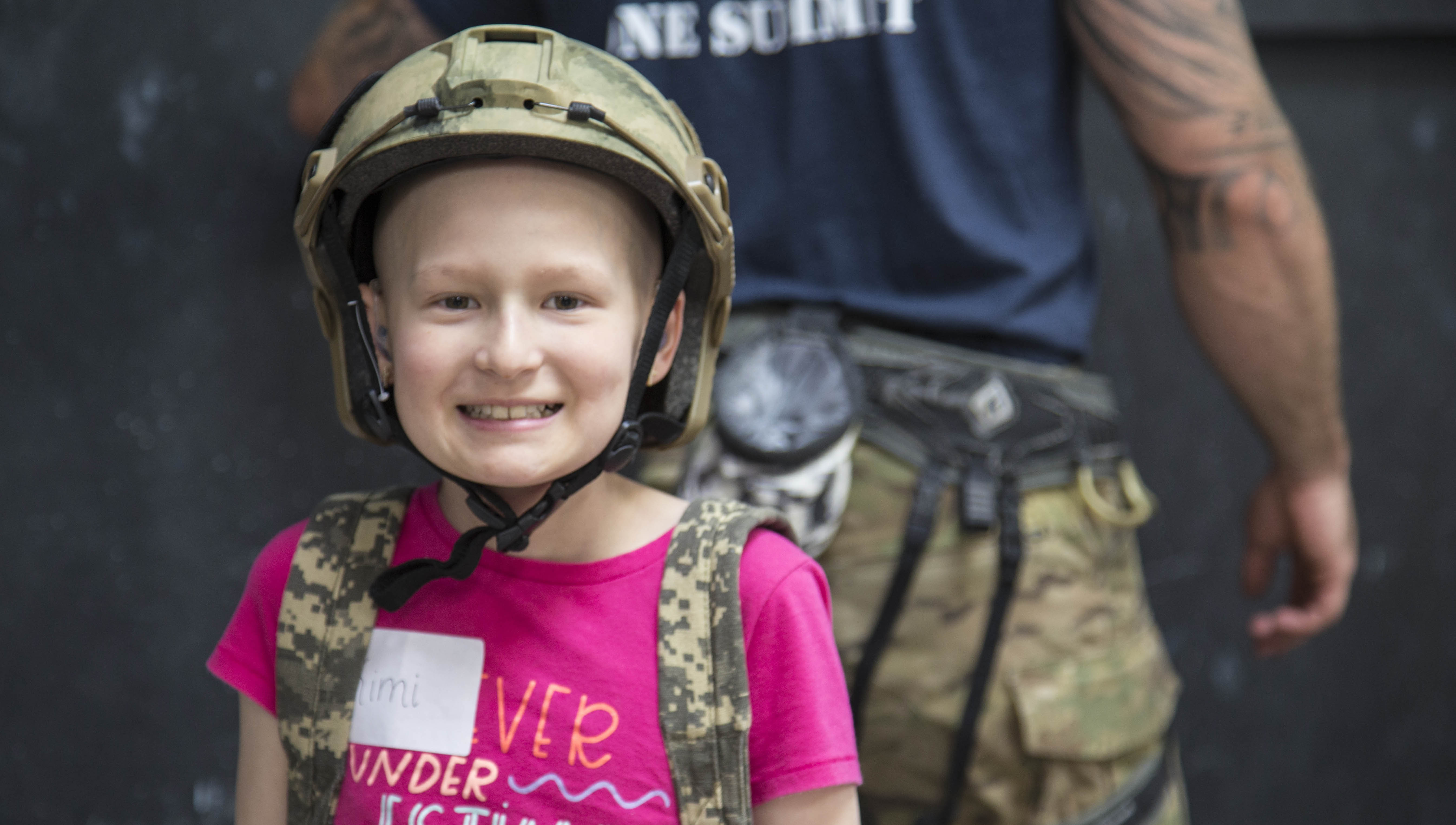 The young girl faced an audience of hardened men, all with many deployments to war torn regions around the world.  She was the keynote speaker.  They watched her intently.  She was up to the challenge.  “Hi.  My name is Kimi and I have been fighting cancer for over seven years.  In all this time, I NEVER let cancer limit me nor do I EVER let cancer define who I am.  I am bigger and stronger than cancer and I plan on beating this and going on to accomplish great things.”

It was the Mentor Training Dinner, a regular event the night before One Summit’s Climb for Courage program, this one in San Diego.  At the dinner, Navy SEAL mentors unite to renew acquaintances and receive an education from child life experts, past mentors and One Summit staff to manage expectations for the following day.  Kimi and her father, Peter were special guests, the first child and parent to address the group and share their Climb for Courage experience. 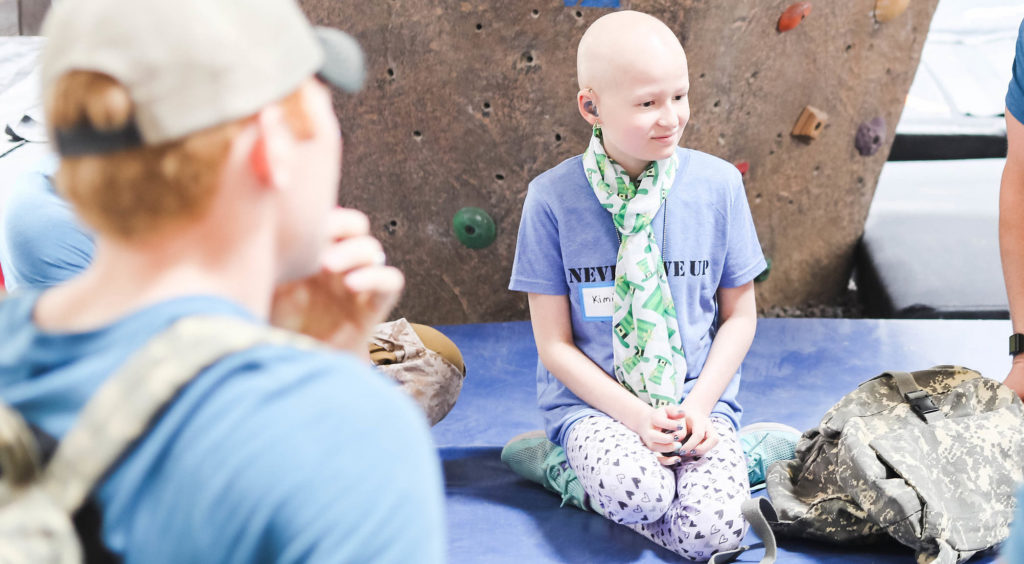 The SEALs take every Climb for Courage as a serious challenge.  They want to be successful mentors.  They want to see their mentees succeed.  But they were not expecting the challenge posed by Kimi.  “Just a word of warning,” she said.  “I am The Queen of rock climbing, so you better bring your ‘A’ game tomorrow.  Also, I know that there are not yet any girl SEALs, so there will only be boy SEALs tomorrow.  So, I promise to go easy on you boys.”

Kimi is not a typical 11-year old.  She has battled cancer for over seven years, since being diagnosed in 2010 with Stage 4 Neuroblastoma, and enduring 16 months of chemotherapy, surgery, a stem cell transplant, radiation, and immunotherapy.  She has faced each day and each challenge with tenacity and resolve, whether it be news of remission (twice) or relapse (three times).

As every SEAL learns at BUD/S, you focus on the challenge in front of you.  When Kimi relapsed the first time, she said to her father: “Daddy, I beat it once, I can do it again.  Let’s go…”  She has never let her battle impede her love for life.  She plays guitar, dances, rides her boogie board at the beach, leads her school as President of the Student Council, and cheers up other pediatric cancer patients. 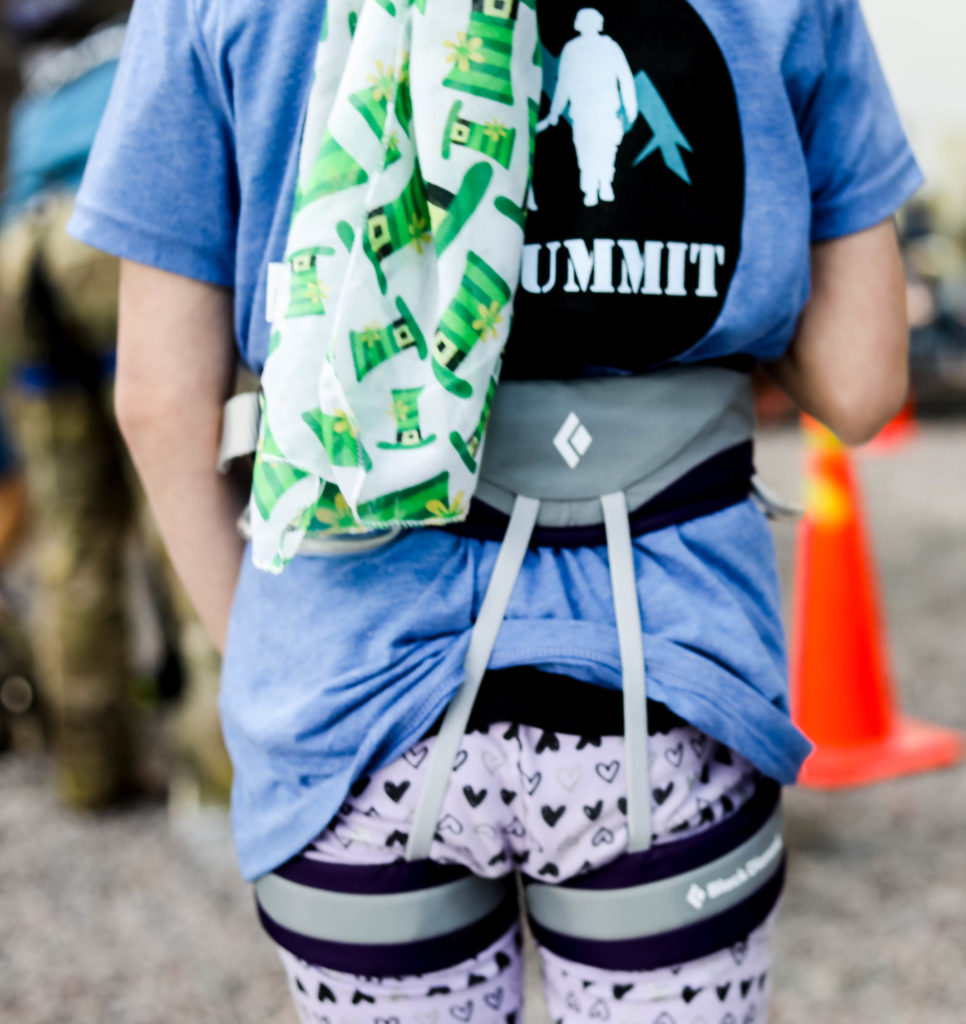 Through all the adversity, she has never lost her sense of humor, as she showed when she told the mentors she enjoyed reading up on SEALs: “I heard one of the first things they have to do is shave their heads.  So, I guess I got that part done already!”

Following his daughter, Peter Schroder explained the impact of One Summit’s Climb for Courage program.  As he put it, “For Kimi to come running to me afterwards and excitedly shout, ‘Daddy, the Navy SEALs said I was brave and strong.’  That is priceless.”  Given Kimi’s experience, Peter knows that Climb for Courage “might motivate one of these kids to fight a little harder, or help them to endure their next week of chemo, or push them to get through their next rehab session, or continue to motivate them to overcome all the challenges these young kids will continue to face.”

But it works both ways.  As Kimi’s Navy SEAL mentor put it, “Kimi, she’s an inspiration to others and to me.  Her courage to never give up and never quit is something that she demonstrates on a daily basis.  Her smile and the way she carries herself shines through her enthusiasm.  I can’t say enough good things about Kimi.”

Each Climb for Courage is a chance for both the kids and the SEALs to find a new hero and a new role model on the road to resilience.