Profiles in Resilience: Climbing Higher with the Giove Family 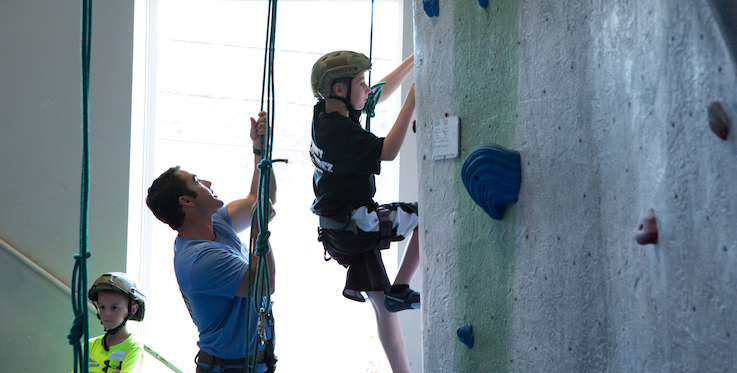 Steve serves on One Summit's Board of Directors. He and his wife Donna live in Durham, NH.

Mason Giove was 11 years old in 2015 when he filled out his application to participate in One Summit’s Boston Climb for Courage. He listed a few of his favorite things: “play video games,” “hang out with friends,” eat “pancakes with syrup” or “white cupcakes with white frosting,” and drive the truck at his “Papa’s” farm in Oklahoma. These sound like wishes of a typical 11-year old boy. One answer, however, gets to the heart of life for our little warriors. Among his “favorite things” was “not going to chemo.”

At 18-months-old, Mason was diagnosed with a brain tumor called Pilocytic Astrocytoma (PA). Efforts to “manage” the tumor included five separate, year-or-more rounds of chemotherapy.  Then, in 2018 a cyst grew off the tumor, causing hydrocephalus, a condition in which excess cerebrospinal fluid (CSF) builds up within the brain. This meant inserting a shunt to help divert the fluid. Various other complications and infections prompted eight brain surgeries over the next few months. He spent a total of 137 days in the hospital and rehab. This past June, he started his sixth round of chemo. 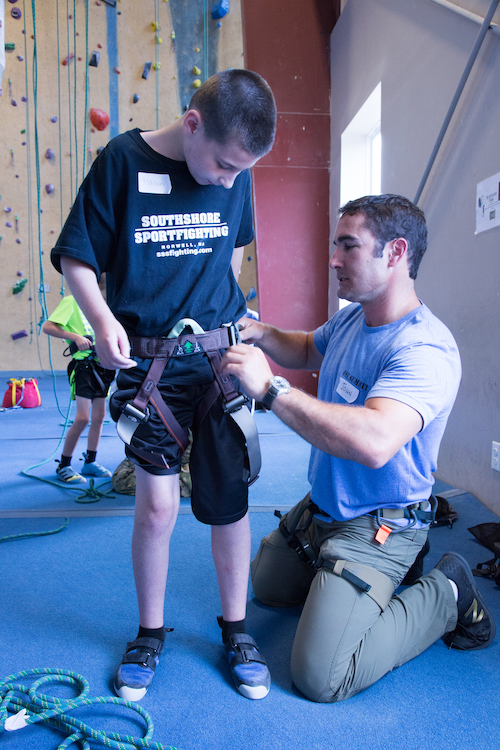 Mason’s enemy is relentless and insidious, ever-changing its mode of assault. As Mason’s dad, Mark has said, “Make no mistake about it, there have been tough days along the way. Days when Mason wanted to throw in the towel.” Yet, with each challenge, Mason has found a way to move forward. One source of inspiration has been One Summit. Mason remembers feeling “nervous, scared, excited” before that 2015 Climb for Courage. Things changed when he met his SEAL mentor, John, a 14-year veteran with 10 deployments — to Iraq, Afghanistan, East Africa, and the Arabian Peninsula. Despite his experience at the very highest levels of Special Operations, John personifies the vast majority of SEALs, who avoid the limelight and pursue their grueling work as nothing more than quiet professionals. When asked what particular lessons or tools from his SEAL experience he brought to the climbs with Mason, John said: “This is probably not what you’re asking, but I’d say humility. Being a SEAL means being surrounded by people who are often better than you, or who exceed your expectations in surprising ways. Mason has a quiet confidence and courage that I didn’t expect and wanted to both respect and challenge in One Summit.” Two warriors, one mentality.

But John also sensed that Mason wasn’t totally comfortable. “What is great about him,” John says, “is that he told me as much, but pressed on regardless.” Mason showed John other traits in 2019, when they reconnected in Boston for Climb Higher – One Summit’s new program for returning warriors. “What struck me was the similarity I noticed between him and seasoned SEAL teammates. His next big surgery was ‘just another trip,’ and his last significant treatment was just another step he had to take to get better. For Mason, cancer has been [and will be] a lifelong fight that he didn’t choose — and can’t opt out of. He takes things in stride, and with a cheerful but worldly determination. Mason also holds a conversation like a person 10 years older.”

That demeanor does not equate to easy success. As Mason’s dad Mark remembered, in 2015 Mason “had some weakness and was scared but [John] kept encouraging him to take one more step. He made it SO MUCH higher than he thought he would.” One reach, one handhold, one step, one toehold at a time. Little by little, each problem was approached and solved. Mother Laura sums it up: “Courageous, inspirational.” But the Gioves are also quick to credit mentor John for his “calm, stoic personality…You can absolutely tell that he is a natural born leader.”

The climbs are a classroom and a memory box for everyone involved, including siblings who take on the challenges alongside their brother or sister. Mason’s younger brother Lawson was “scared” in 2019, but his mentor “kept encouraging” him and he “made it” to the “top of the highest part of the gym.” Sometimes a little humor helps. In 2015, Lawson’s mentor told him he “needed to fill up on pizza so he had weight to repel down the wall.” Lawson’s twin brother Louden still has his dog tags from 2015. Younger sister Mattea was game to race her older brothers in 2019. Even though she lost, she is proud that she was on the wall “and didn’t quit.”

Perhaps most-notable is the impact Mason’s diagnosis and journey of resilience has had on his dad, Mark – who felt inspired to change his career from carpenter to nurse so that he could better understand his son’s battle and help others. With an Associates degree in hand, he is now pursuing his B.S. at Curry College. A true example of post-traumatic growth. “I have thought about these climbs a ton,” Mark says, “and how alive Mason looked during them and how he didn’t quit. I thought about that first climb a lot when Mason was in the hospital this year and how he emulated that never quit attitude.” The Gioves aren’t quitters in the classroom, on the wall, or anywhere.

This fighting spirit is not lost on John. “Mason and his family maintain an incredibly upbeat and pragmatic attitude in the face of real adversity and uncertainty in their everyday lives.  It’s been inspiring, and grounding.  They have a familiar [from my SEAL life] combination of dealing with obstacles they cannot change while constantly fighting to improve their position - a great example for anyone.”

And a great way to climb higher.