Life, striving for the highs while navigating the lows – Joe Andruzzi 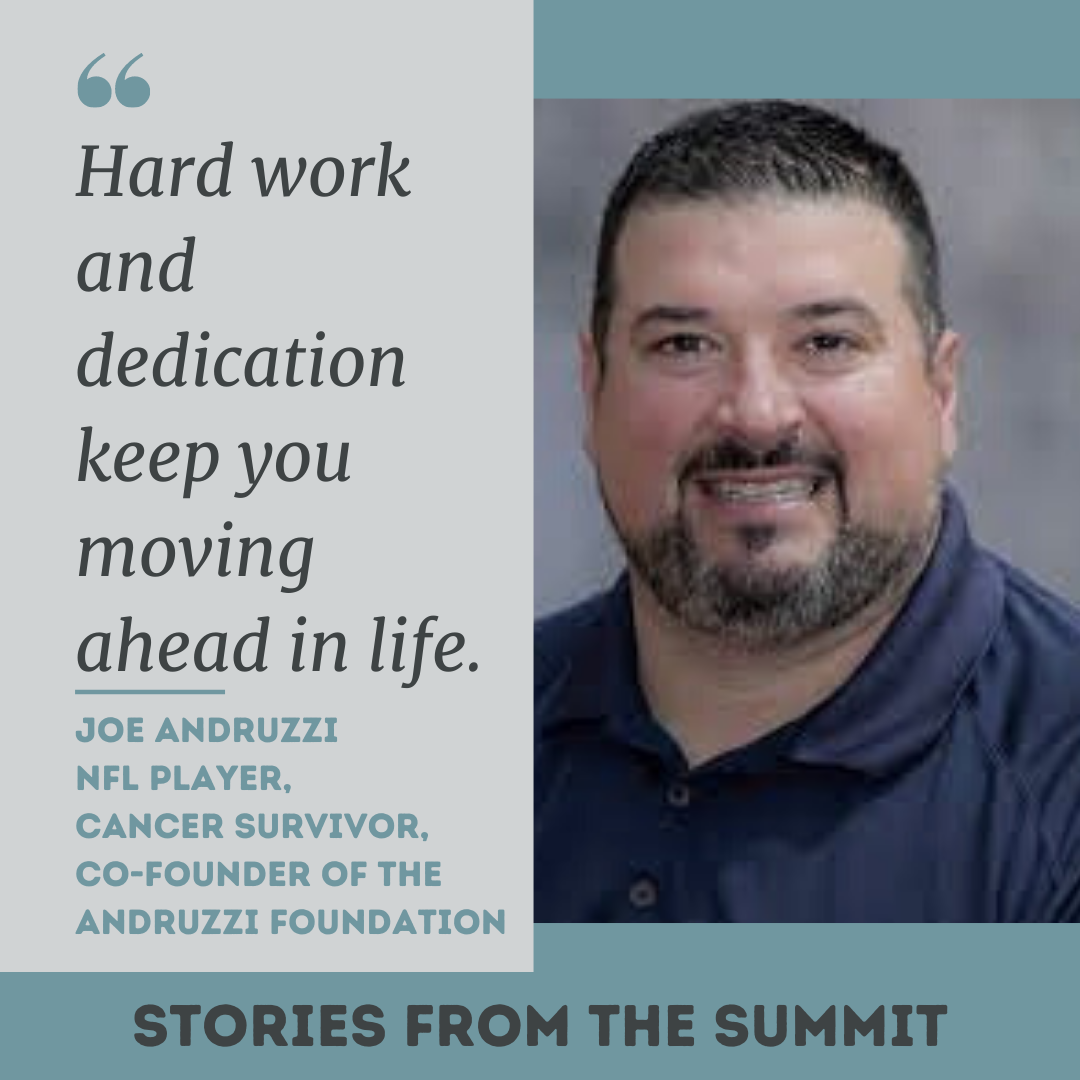 By Maria Papandreou, One Summit Senior Manager of Development & Communications

This month we hosted our third Stories from the Summit guest speaker, Joe Andruzzi. It was wonderful having our community of warriors come together and hear Joe’s incredible journey from an NFL player to a cancer survivor and how he built resilience through volunteerism. Joe’s enigmatic personality was evident throughout the evening.

Joe grew up in New York City alongside his three brothers, who he fondly recalls used to get mad at him for eating all the food. A son of a police officer, the importance of hard work was instilled from a young age. His mom didn’t allow him to play football until high school. He graduated and went on to play at Southern Connecticut State University. He said, “Playing football was a bonus for me. I was there for my education.”

His senior year at Southern, he got his shot with the NFL when the Green Bay Packers picked him up. He signed with no bonus, “They even took the pen back with which I signed the papers. But that was okay with me. I was there to prove I could do it.” And that’s just what Joe did. He made a name for himself. In February 1988, the Packers sent him off to Scotland to play for NFL Europe. Joe was released from the Packers after three seasons and then signed by the New England Patriots in 2000. He played five seasons as a Patriots and earned three Super Bowl Rings. The 2001 season held a special place in his heart. After a long, grueling season in the aftermath of 9/11, it meant the world to him to have his family there to celebrate with him. All three of his brothers were members of the New York City Fire Department and responded to the attacks on the World Trade center that year. He then went on to play with the Cleveland Browns for two years and then was released.

During the short two-week interim of being a free agent, Joe began to have stomach issues. He went to see the family doctor and was told that a large mass was found near his colon after some scans. In May 2007, he was diagnosed with non-Hodgkin’s Burkitt’s lymphoma that was predicted to double in size in just twenty-four hours. The family relocated back to New England for his treatment. He was treated with an aggressive form of chemotherapy over three months and then spent the following year recovering at home.

He recalls that time being very difficult and compared his life to a rollercoaster. “I was in the tunnel part of the coaster, where everything is black. I had to start climbing back up slowly. It was a tough battle, the toughest of my life. Just getting out of the hospital bed was a challenge.” His wife and four children were a driving force in his determination to recover. “90% of the time my wife Jen was by my bedside, she’d get up at 5 AM to get back home to the kids before they would wake up. She was my rock.” 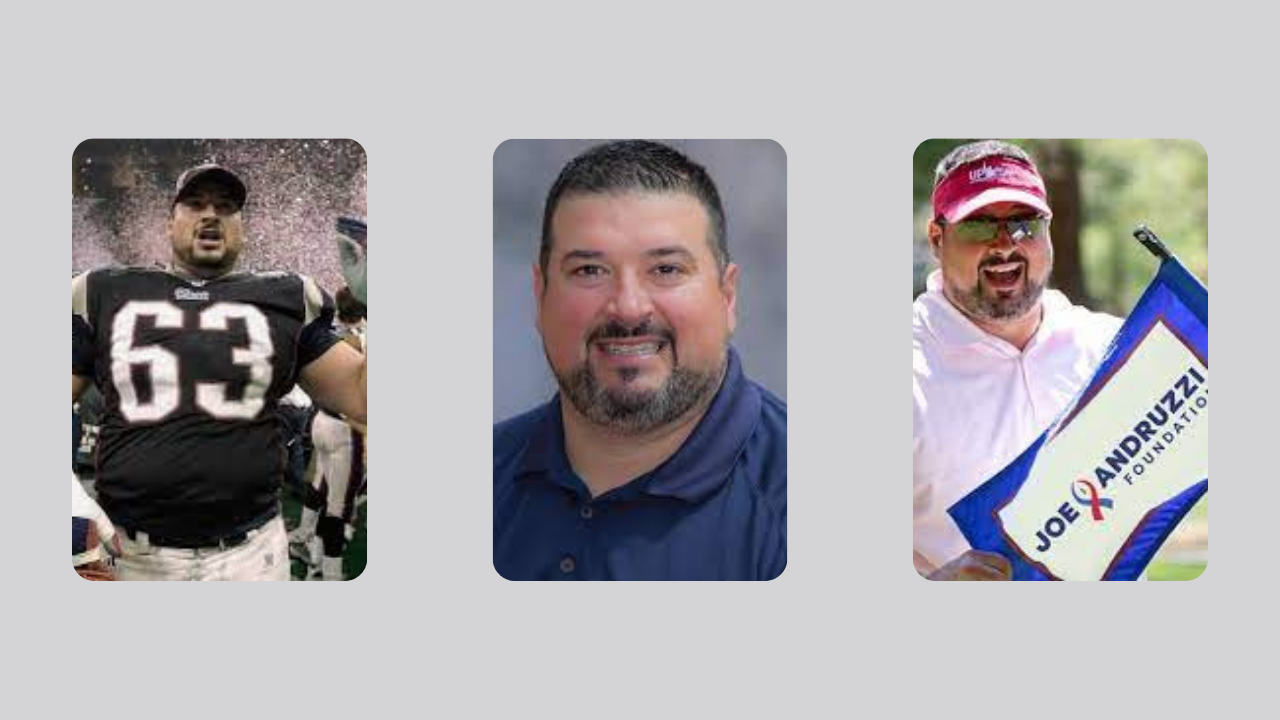 Joe said he struggled after his recovery with depression and anxiety. But he turned that struggle into something positive. Together in 2008, Joe and Jen co-founded the Joe Andruzzi Foundation. The organization is committed to providing help, hope, and a reason to smile for New England cancer patients and their families by contributing financial support when it is needed most. “I was told recently I love you as a player, but I love what you do now more. It’s a great feeling for me to be able to give back.”

A theme that shone through Joe’s story was to “cherish every day.” Living life to the fullest is so important. Since that evening, I have made a conscious effort to remember these words from Joe daily, “Live for the moment. Be the best person you can be. Keep smiling. It’s the best medicine.” Hearing Joe Andruzzi tell his story in his own words was powerful. Knowing this larger-than-life man navigated some of the highest highs of an NFL career to the lowest lows of chemotherapy and has come out on top is an inspiration to us all. Resilience is powerful. Support from family and friends, belief in something bigger than ourselves, and the strength of the human spirit are all driving forces in keeping us pushing forward during life’s constant challenges.

Click HERE to hear Joe tell his Story from the Summit. 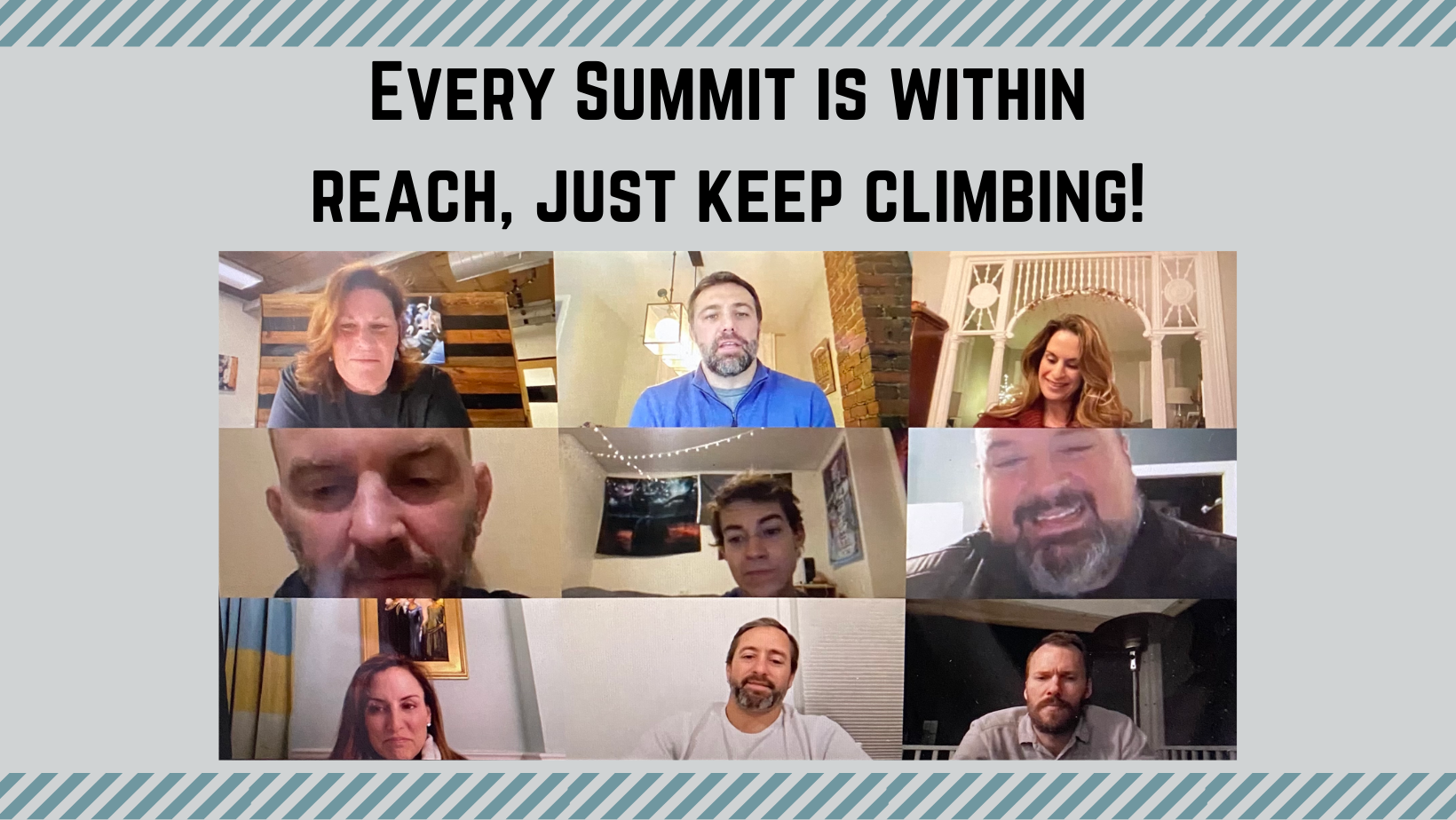